For you as a game developer, it can be difficult to decide which languages to select for localization and what parts of your game to localize. Should you go for the most popular European ones? Or aim at Asian languages? Keep reading to learn about the must-have languages for game translation and game localization costs.

What parts of the game to localize?

Before we move to the practicalities, let’s talk about the components of your game you could localize as it will directly impact your localization costs.

Besides the in-game text, you can translate the description, updates, and keywords if you publish your game via the Apple App Store, Google Play, Steam or any other platform. Not to mention marketing and advertising materials if you decide to promote your game further.

So, your game localization process can be identified as:

To localize the app store description text is a no-brainer. This is what you front your game with and what people will base their buy or download decision on.

All text surrounding your description will be in the country store’s official language (Google and Apple fully localize their stores) so translated material will blend with the official store text and create a professional impression.

Should you translate the text in the actual game?

Distribution is worldwide and by localizing you extend your reach and potential to appeal to a global audience. Allowing your players to enjoy your game in their native language will positively affect their experience and lead to better reviews.

These benefits do of course need to be weighed against the cost.

How to Prepare Your Game for Localization: Keep Costs Down

How much does it cost to translate a video game in 2021?

Localization costs are driven by the number of words in your game, target languages, and the translation rates.

The cost of game translations performed by human linguists will depend on the language. These can vary between €0.11 and €0.15 per word or character (for Chinese). Proofreading usually costs 50% of the translation rates. These are the LocalizeDirect rates but it gives you an idea about approximate prices in the market.

Quality of the translation is an important factor - human translations always cost more than machine with human revision.

A common approach is to translate the app-store metadata into more languages than the actual game. Have no fear, as the amount of text in your description is limited, translation shouldn’t be too expensive.

When it comes to the in-game content, it all depends on how “wordy” your game is. On average, our game clients kick off with 7-10 foreign languages when localizing their in-game text.

With regards to localizing updates, you need to consider how often you plan on releasing them. It’s preferable to work with the same translation service provider - you need speedy turnaround and consistency with your strings.

5 questions to answer before contacting the game localization agency

When selecting the markets and languages for localization, ask yourself a few questions:

You need this information to understand the potential of your game and how it matches the opportunities of the market you are about to target.

A big factor is also what expectations certain countries have. For example, in Poland, it’s quite common to only have text localization and English voice-overs (although there has been a shift to more full loc titles). In France, Italy, Germany, and Spain, gamers expect full VO, especially on big titles.

In some non-native English speaking countries, gamers don’t mind playing games in English at all. Especially if the amount of text is minimal or the concept of the game is a familiar one.

Pro Tip: Check the language specifications in T-Index or the EF English Proficiency Index. It can be of use to know which countries most probably won’t accept the unlocalized game at all (with low and very low English proficiency skills). 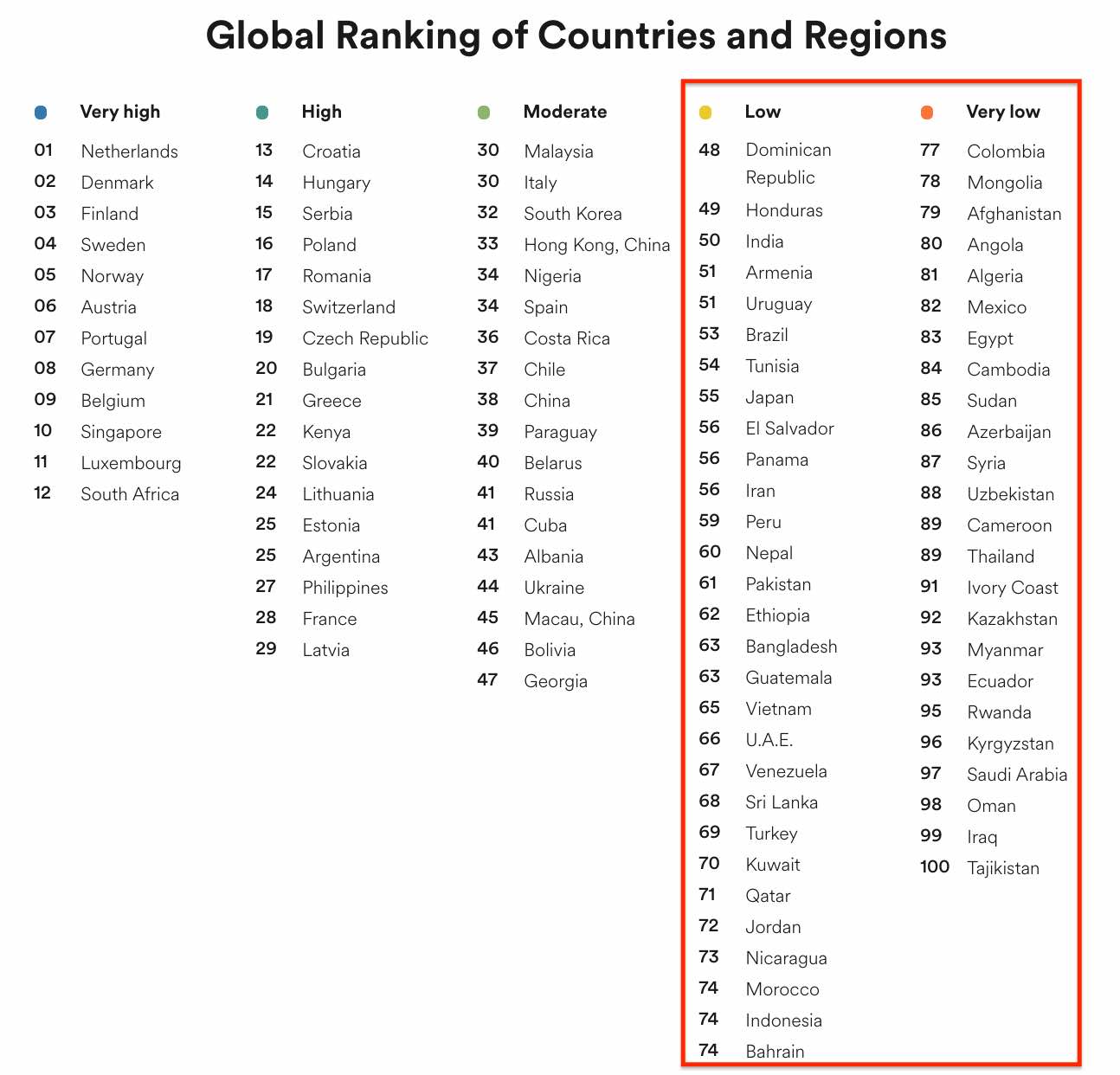 Review the most popular games in various markets to evaluate the competition and audience preferences.

Pro Tip: You can find information about mobile games in App Annie’s reports. SimilarWeb is another free tool with plenty of functionality for this purpose. Steam publishes real-time data about its top 100 PC games by player count and the most demanded languages.

Some key metrics game developers should pay attention to are downloads and revenue rates specifically for games. Most developers would share the common goal of wanting to get their game downloaded as many times as possible or generate as much revenue as they can.

What languages are worth localizing your game into?

For the potential revenue stream and amount of players you can reach, go through the games reports regularly published by Newzoo. There are 2.7 billion gamers globally which are predicted to generate revenues of $159.3 billion in 2020.

In 2018, these markets were followed by Russia, Mexico, Brazil, Australia, Taiwan, India, Indonesia, Turkey, Thailand, and the Netherlands that altogether added another $11,5 billion (8%).

Hence, by localizing into all 20 countries, you’ll get access to the markets with nearly 90% of the world’s game revenue. Asia-Pacific brings about 50% whilst North America generates 20% of the global game revenue.

If your monetization model is based on ads, then it’s reasonable to consider localizing into the countries with the largest gamer user base, such as China, India, Brazil, or Russia.

Do I need to translate my game into 20 languages?

We assume that your source language is already English, otherwise, translating it into English is the first thing you should do. Having your game in English will allow you to reach North American, Australian, British, part of the Indian and some other Asian markets. You may want to also look at separate British and American versions. It can irk if the player finds words that aren’t local or expected. If they are game genre specific then this is fine, however many are not.

Now, let’s have a look at the most popular languages we localized games into in 2019 in terms of word count. 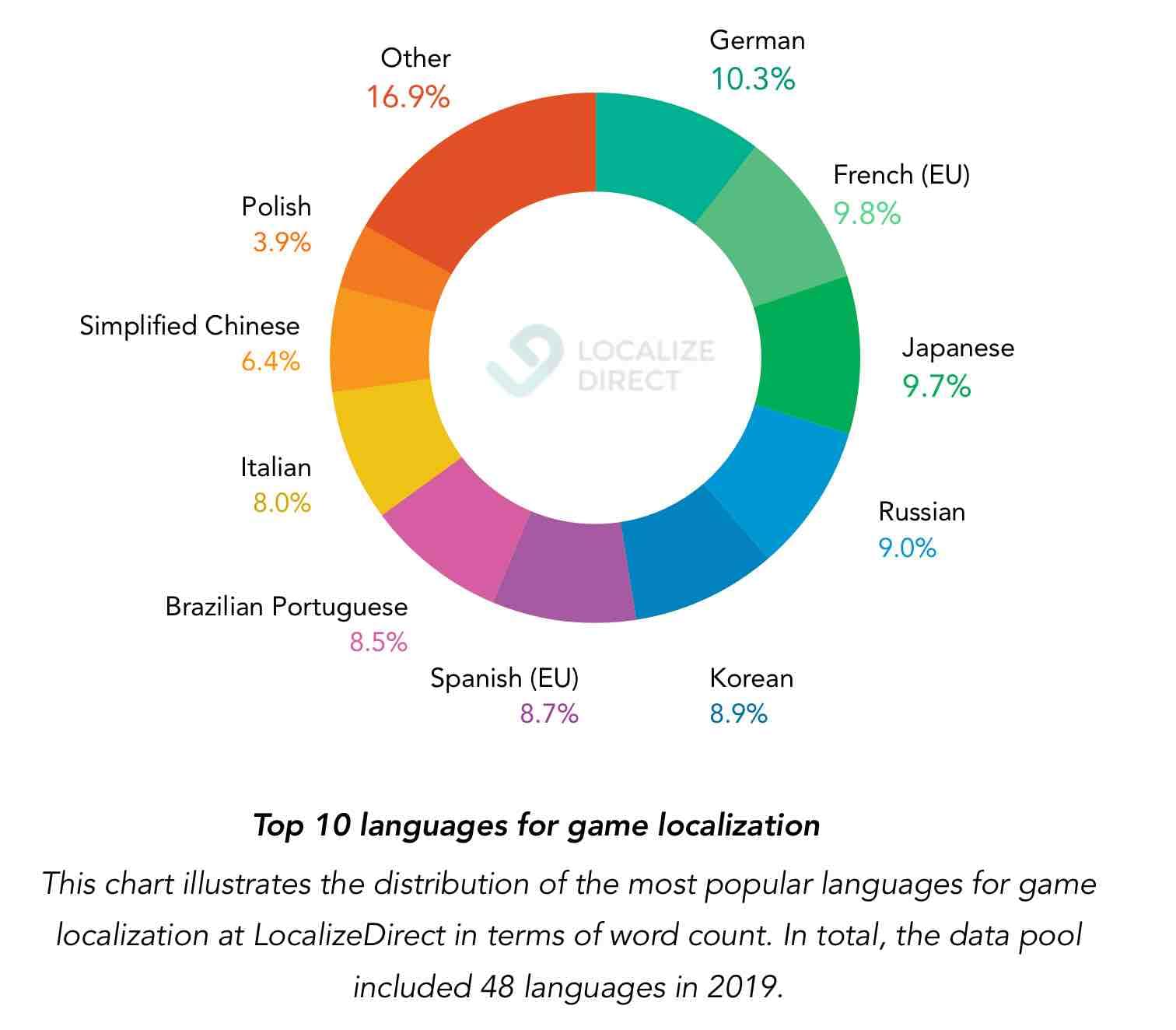 Again, the first 10 languages made over 80% of the overall word count pool.

The majority of the game development companies based in Europe or North America select FIGS+PT+RU as the primary choice while Asian game studios and publishers prefer CJK as the first wave in their localization process.

As well as France, it opens the door to Belgium, Switzerland, Monaco and a number of African countries. Metropolitan (or Standard European) French works for Canada too (about 20% of Canadian population speaks French) although Canadians may prefer the local version of it.

The difference? Canadian (Québec) French contains many adopted English or aboriginal words, and displays more local idioms and expressions. For instance, “ma blonde” means “my girlfriend” in Québec, but European French speakers will take it literally for “my blonde”.

If you distribute your game online in Canada, you may leave it in English. However, the francization of video games is necessary if you sell offline.

Italian is officially spoken in Italy, Switzerland and San Marino. Italy is the 9th largest gaming market in the world. It got accustomed to the high-quality game localizations due to the low English penetration rates.

German was #1 second time in a row in our annual game localization rank. With German, you’ll be able to reach German and Austrian gamers, as well as those in Switzerland, Luxembourg and Lichtenstein.

Spain’s gaming market is fairly small - 27 million. However, if we consider Spanish speaking internet users we’re talking about a whopping 363 million - the third largest cluster after English and Chinese. Given the dominance of the United States in the rankings and that 18.5% of the population in the US is Hispanic (60.6 million), it’s not a surprise why many developers decide to translate games to Spanish.

Important: Latin American Spanish is different from the European. Nevertheless, in South America, a game in any Spanish is welcomed more than just an English version.

LEARN MORE: Localizing Your Game into Spanish, Which Spanish Do You Choose?

Localization into Chinese often requires game culturalization. Google Play Store is banned in mainland China and replaced by the local Android stores. If you use other mobile app stores (like Amazon or Tencent) then we recommend translating your game into Simplified Chinese too.

Important: Publishing your game in Hong Kong or Taiwan, you’ll need to translate your game into Traditional Chinese (local versions).

By the way, Chinese is the second most popular language on Steam, followed by Russian. Bare it in mind if you prepare your PC game for Steam.

The most popular Steam languages, May 2020.

An Essential Guide for Game Publishing in China

It allows you to reach half of the Latin American continent and one of the most populated emerging economies - Brazil. Please, do not reuse your European Portuguese translations - here we explain why.

A lingua franca in Russia, Kazakhstan, and Belarus. It’s a big one especially if the game is to be released on Steam. Statistically, Russian gamers leave negative comments more often than others if the game isn’t localized in their language. It can hurt the overall score of the game.

The fastest-growing languages in game localization

Finally, let’s examine the languages that demonstrated the highest growth in the past four years.

In the past four years, Thai demonstrated a 4x increase in the growth rate, followed by Polish and Korean (3.5x each), Japanese (3x), Turkish and Vietnamese (2.5x each). Hindi and Simplified Chinese also joined the ranks of the fastest-growing game localization languages. Apart from Simplified Chinese, Japanese and Korean (which were already pretty big), emerging markets with a high number of gamers are the ones attracting attention within the games industry, this growth will most likely continue.

READ NEXT: 10 Secrets for Your Successful Game Localization to Japan

Having your game translated into “traditional” European + Asian languages is always a safe bet. But stepping into emerging markets now may be a reasonable move for further expansion. Check our free game localization tool to find markets that work best for your game.