While e-commerce continues exploiting Christmas and New Year by launching numerous sales with crazy discounts, many video game companies also prepare Christmas updates to entertain their players. It’s easier if the game is already Christmas-related (like VR Snowballs) but what about the rest?

What can game devs do to boost their sales and stimulate user engagement during the Christmas period?

Partnering with other indie game developers can be a great idea, you can leverage each other’s profile and communities.

Snowcastle Games cooperated with a bunch of developers to create an Advent Calendar. They give away a game every day to the participants who sign up for the campaign. Every day of December, up until Christmas, one of the developers is featured.

For gamers, participation is free of charge, and the winners receive promo codes for games. The calendar is distributed through social media channels, with help from the other developers involved. It’s a great idea!

“There are mutual benefits for everyone involved. For the other developers participating, they get visibility and more eyeballs on their games that may need some free, organic marketing. The community that supports these developers also may not have heard of other games in the calendar, so they enjoy the chance to win some games they may not have had the chance to experience”- Nicholas Rajan, Marketing & Community Manager from Snowcastle Games explains.

Last year, over 2,000 people signed up for the calendar. 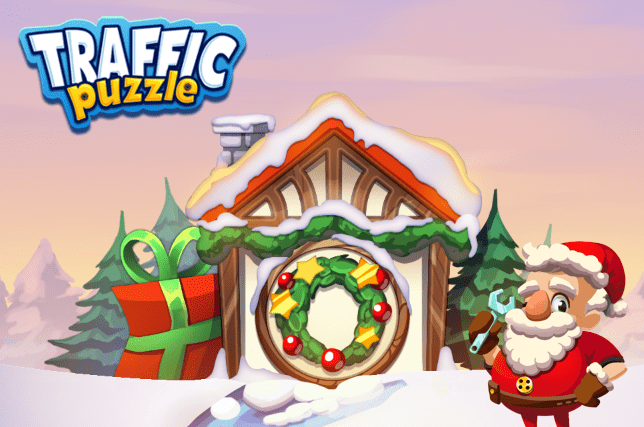 In-game Christmas challenges? Why not?

Christmas events is probably the second most popular category after themed elements in video games.

“We are preparing Traffic Puzzle for the Christmas holiday. Our game is going to feature a special Christmas event, which will engage players to complete custom levels and achieve rewards during this time. Also, the plan for the game icon is to change it temporarily to attract new players.” - Jakub Łukasiewicz from Picadilla told us.

If you don’t want to limit yourself to a few pre-Christmas weeks, then publishing winter updates can be an alternative. Car battle MOBA Heavy Metal Machines favored a themed season “Dawn of Winter” which, of course, can be played throughout February.

Christmas updates are a must if the game’s marketing strategy is heavily dependent on influencers - popular YouTube bloggers covering games, gamers, streamers and so on. A holiday theme inside the game is a way to get featured in their videos, that’s why catering to YouTubers can become quite a successful strategy.

“YouTubers get paid for showing ads, and Christmas ads are the ones that pay best. That is why you will see a lot of YouTubers doubling the number of videos they release during December. There is simply more money to be made. In Trailmakers, we have therefore made a Snow Island - the only island in the game with snow on it, and a few small winter-themed gimmicks e.g. a snowball dispenser. It is just enough for the YouTubers to have an excuse to pick it up during December.” - Ole Teglbjærg, Head of Production at Flashbulb Games explains.

Perhaps, it’s worth the effort to get your game listed among “the best holiday-themed video games to play this Christmas”.

Kiloo’s Subway Surfers is probably one of the most responsive and dynamic games when it comes to festive seasons. We’ve already mentioned their Halloween updates, especially their interpretation of Mexican Day of the Dead (a Halloween’s analog in Latin America).

This time, the game company sent the surfers on their winter holidays, added the ice snowboard, clothing, and the festive ringtone/soundtrack. Actually, Kiloo pushes Christmas updates every year, you can watch them all on Youtube.

Puzzle game Patterned by BorderLeap will also feature plenty of holiday-specific patterns, some created exclusively for this game.

“Traditionally, with games such as Alpha Omega or Harmony 3, I’ve released holiday-specific updates and they have done really well. There’s always increased downloads and activity in the App Store, and players have extra time and money to invest into apps and games.” - Nate Dicken, founder & designer at Borderleap admits.

“Our holiday content is likely to be fairly light - Santa hats on certain characters or Christmas trees here and there.”

Many of these updates do not require localization at all: it’s just an aesthetic move.

Some developers offer Christmas discounts, especially if the gaming platforms like Steam or PS have their own promotions.

But is it true that winter holidays can generate more sales for game devs?

“We notice that at the end of November (Thanksgiving) and (Christmas) people get new phones and that often results in reinstalling the app. We don’t carry level progress to new devices – but the end result is we get a huge boost in playing around the end of November through mid-January as people play a lot more (maybe to make progress through levels again).”

Some see it as a way to keep the audience interested.

“We see pretty much the same engagement. For us building a premium game, it is about leveraging the organic marketing channels available to us.” - Ole Teglbjærg says.

A few developers admitted that the allocated resources into the Christmas updates did not pay off. Some noticed that for small developers, it’s hard to compete with AAA titles, and, thus, indie games tend to sell better in less busy periods.

“We tend to avoid Xmas and E3 season where possible. These periods find indie games with modest marketing budgets will be drowned out by the big AAA hitters. (unless it’s gone Goose Game style viral)” - Kane Forrester from Coatsink said.

So, to do or not to do? It’s up to you and your business model.

We at LocalizeDirect decided to add a little Holiday season flavour to our social media logos, a sweet set of antlers! Check it out :)

Tip: If you missed Christmas updates, you have enough time to prepare your game for the Chinese New Year in the end of January. Read how to entertain Chinese gamers during the festive season.