Being one of the largest economies in Latin America, Brazil is a leader when it comes to game revenue on the continent. It also inhabits the largest Portuguese-speaking audience in the world. We dug into some numbers in the local gaming market and talked to Brazilian translators to get insights about game localization in Brazil and why you can’t use your European Portuguese translations there. 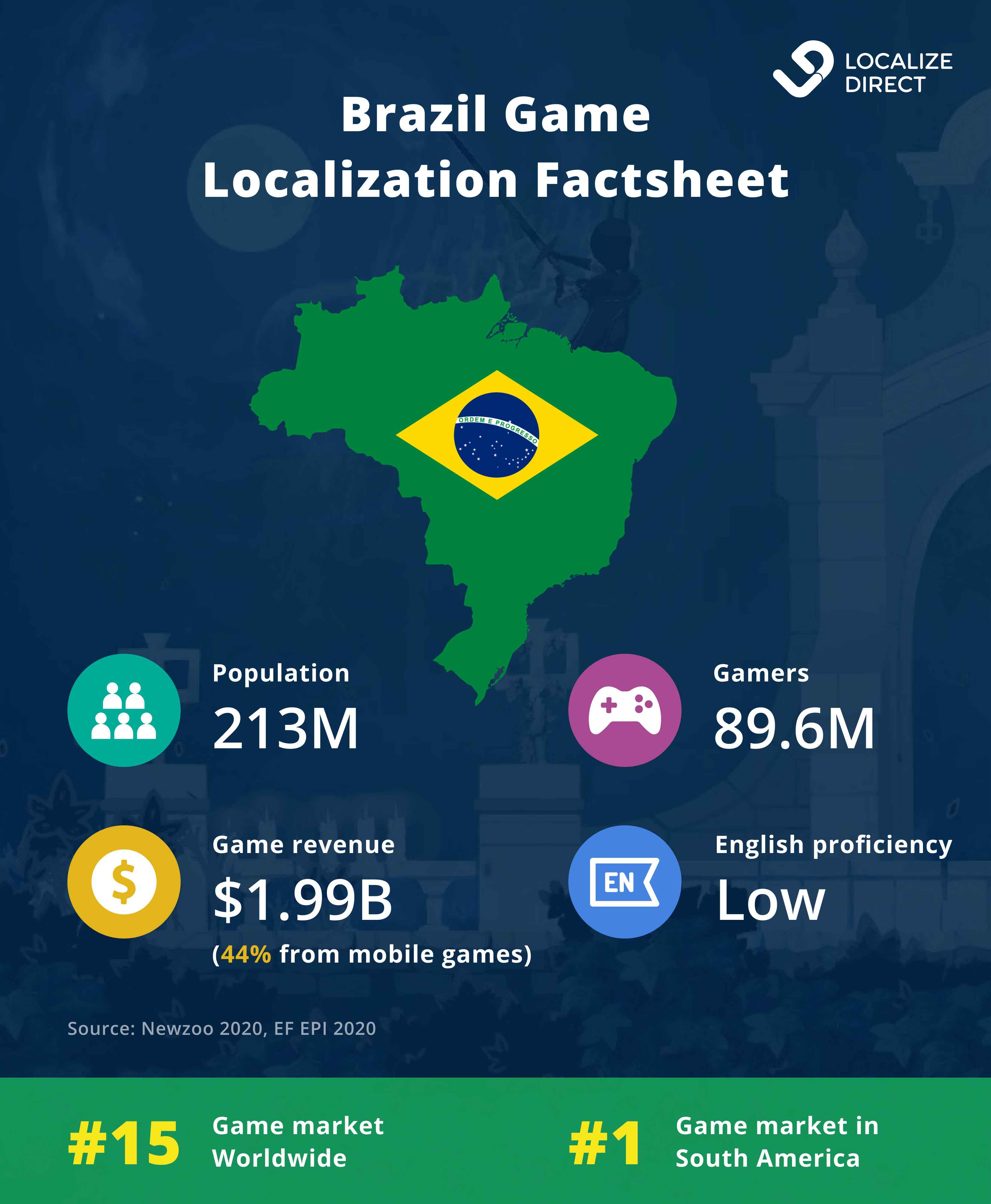 Brazil is a country with strong cultural and historical heritage and low English proficiency. It’s been ranked far behind Poland, Portugal, South Korea, and even Argentina in terms of English understanding EF index.

Because of this, mobile or video game localization into Brazilian Portuguese is a good investment.

Are you thinking of reusing your European Portuguese translation? Don’t. You’ll learn why in a minute.

What games do well in Brazil?

Brazilians have a long tradition of playing games. Before internet gaming, playing cards, board games, and bingo was a neat way of spending some time together.

The tradition of combining joy with competition is one reason why the video game industry is growing incredibly fast in Brazil. Games aimed at the Brazilian market need to have a good story. Adventure games, action games, and car racing are the most popular genres, but, as it is Brazil, shooting and soccer games are always a winner. 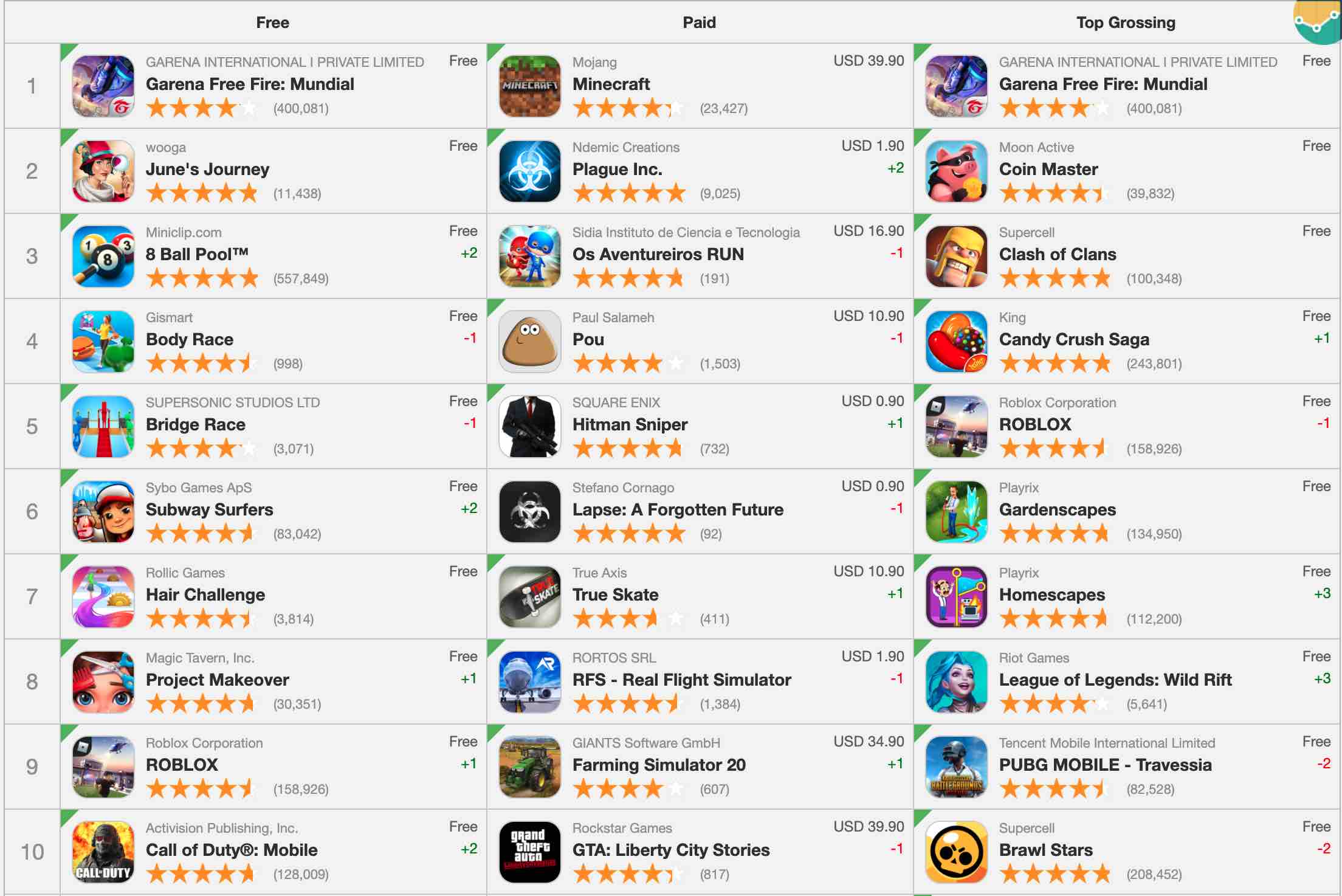 Brazil is the 3rd largest esports market in the world with 8.56 million enthusiasts and about 17.6 million of the most passionate esports fans. Esports games are gaining more followers every year with the leading players already earning hundreds of thousands of US dollars in prizes.

Interesting fact: Some traditional sports clubs and celebrities have entered the esports space, supporting e-teams and tournaments. Football legend Ronaldo and poker players André Akkari and Igor Trafane invested in CNB eSports Club. Their teams competed in FIFA (the most popular esports franchise), League of Legends, and Arena of Valor.


Strategy and cards games take their share of the market as well. Parents often play games with their children or, at least, are aware of their kids playing online games.

However, their platform preferences differ: while dominating in the mobile category, women play less console and PC games than men.

Take the gamers’ genre preferences into account when translating your game into Brazilian.

What about game monetization?

In the past, Brazil has had to deal with problems like piracy, and a game industry with high tax burdens. Much has changed. Brazilian console production has released some of the tax burden, followed by a growing game industry and desire for entertainment. Still, only ⅓ of Brazilians play games, which is a huge audience potential in terms of numbers.

As access to the internet grows, many children and young adults play video games. A large market, increasing incomes, and a growing technical infrastructure will give a translation into Brazilian Portuguese a potentially high return on investment.

From being a game country where most gamers download free-to-play games, over 54.6% of video games players paid for the games. Paying gamers spent money mostly on in-game items, virtual goods, and DLC/expansion packs.

The ARPU in video games for Brazil. Source: Statista, 2019.

Mobile games are the most popular in Brazil (played by over 70.4% of Brazilian gamers), followed by console and PC games. The spend in mobile games increased by 60% in the last 2 years.

Android is by far the most popular operating system in Brazil with 86.9% of market share against 12.82% for iOS. Still, 75% of smartphone gamers only download free games. On average, young Brazilians spend more than 3 hours on a computer, tablet or smartphone every day.

79.2% of Brazilian gamers are PC players. Excluding English, Brazilian Portuguese is the 6th largest language on Steam which makes it a good choice when selecting languages to translate a Steam game into.

The top 6 most popular languages on Steam, April 2019. Source: Steam.

The necessity of localization in Brazil

Brazil is the world’s largest Portuguese-speaking country. Only one in 20 Brazilians speaks English. To make a game appeal to Brazilian gamers and to give them the same experience as the original version, it needs to be localized into Brazilian Portuguese. Mobile game localization is even more important if you are aiming the game at a younger audience or children.

Why can’t I use European Portuguese?

The distance between Europe and Latin America isn’t just the geographical split created by an ocean. The cultural, historical and modern heritage differs, and with this the evolution of a language into two different variants.

The language differences between Brazilian Portuguese and European Portuguese are essential: some words are spelled differently, Brazilians make verbs out of nouns or condense expressions and many words aren’t the same.

Take a look at the following examples:

Over the years, the Brazilian Portuguese vocabulary has also incorporated words from African and Native American origins.

We asked a few professional translators who have localized games into Brazilian Portuguese about the pitfalls they face.

When translating from English into Brazilian Portuguese the words get around 25% longer. Leave enough room in the strings to allow space for long translations when designing your game.

“Another big issue would be word order, so when developers try to break sentences down in order to reuse the translation of specific terms, there is always the chance that the end result will be catastrophic,” - José Helbert Pina, English-Brazilian Portuguese translator.

Make sure you provide enough time for the gamers to read and process information from dialogues, subtitles, and voiceovers.

There are also several accented letters in Brazilian and European Portuguese. Before localizing make sure your game has international character encoding (UTF-8) and accepts frequently used letters like ê and ô.

You can leave English names untranslated. Brazilians got used to foreign names, especially English, and may even find them “cool”.

“Brazilian players have been left with English subtitles and voices for many console generations, so we got accustomed to certain things in English, but each case is a different one. In special circumstances, a partial or full translation of proper nouns is recommended,” - Paulo Ricardo Koronfli, English-Brazilian Portuguese translator.

An example: In the Portuguese version of Warspear Online, “Mask of Smiley Willy” was localized into “Máscara do Gui Sorridente”, and “Tricks of Barry the Crest” into “Travessuras de Bruno, o Crista”. The names like Willy or Barry could have been kept in English but the decision made during the localization process was to adapt them to local culture.

When localizing temperatures, distances and weights, convert them to Celsius (Cº), meters, kilos, and grams - most Brazilians will be completely lost if they see the temperatures in Fahrenheit (ºF), distances in miles or weight in pounds. With dates, use DD/MM/YYYY format, time - 24h clock, and money - R$1.000,50 instead of the North American $1,500.50. Also, bare in mind that Brazil is situated in the Southern Hemisphere and thus the seasons are different from those in Europe or the US. Pay attention to the climate-related content in the game.

Brazilians are pretty tolerant of sensitive subjects, especially if the target audience is young adults.

“The usual “no-nos” would be “racism” and other kinds of discrimination. Incitement to suicide is another topic to avoid, but I believe that’s also valid everywhere else” - José Helbert Pina.

“As for sensitive topics, sexuality may be one of them,” Paulo Ricardo Koronfli warns.

Sexual themes can be sensitive due to the fact that most of it involves the objectification of women. There’s an ever-growing trend of bringing more women into “hardcore” (PC and console) gaming, but they face an alarming amount of sexism from gaming partners and the gaming community. Taking into account that female gamers are prevalent in Brazil, as a developer, you may not want to lose this market.

Can you be fined for depicting the sensitive elements in your game? Yes. But the Brazilian authorities’ approach is pretty fickle.

In the past, Brazil banned a few games with scenes of excessive violence and cruelty, including Doom, Mortal Kombat, and Bully. The latest was illegal to distribute for depicting harassment in schools, although, in 2016, the ban was lifted.

MMORPG EverQuest was prohibited by Federal Court to be sold in one Brazilian state Minas Gerais for players losing their “moral virtue”. The weirdest ban was put upon Counter-Strike for containing the map of favelas, and… “the subversion of public order.''

Adapting your game to a Brazilian cultural background can potentially give you extra points from the gaming community.

“Most Brazilian gamers are happy playing good games as they are, but they will always praise games that have been localized, and used references to local culture and personalities,” José Helbert Pina explains.

DDTank Brasil offered localized outfits to players, and, of course, included a few costumes of Carnival that gamers could use. 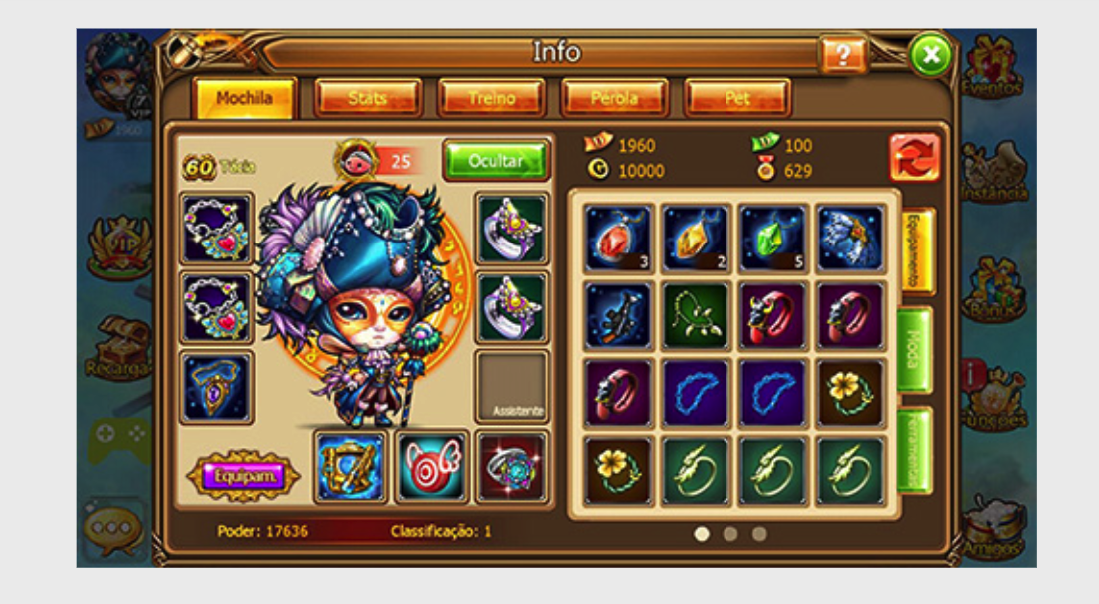 In the case of football games, sometimes, the European Portuguese version and the opportunity to associate themselves with local teams is enough to please Brazilian gamers. Pro Evolution Soccer (PES) by Konami became one of the best-loved and top-selling series in the country.

In one of the earlier versions, there was an option to play for the local teams, however, only “SC Internacional” from Brazil was available. So Brazilian gamers spent a lot of time in Edit mode creating their favorite teams themselves. It resulted in negative comments and an often frustrating experience (editing is not the same as playing).

Konami took heed of the experience and included 5 Brazilian teams in PES 2011 with featured comments in both European and Brazilian Portuguese.


The Brazilian games market is relatively new and the potential to break through is high. But to achieve high game downloads and access the wider population you need to localize your game into Brazilian Portuguese.