When looking at revenues, Japan is the 3rd largest games market in the world. Compared to the US, device numbers are fewer but revenue per user is higher. Prepare your game from the start for the Japanese game market - then the game or app localization process will be smoother. 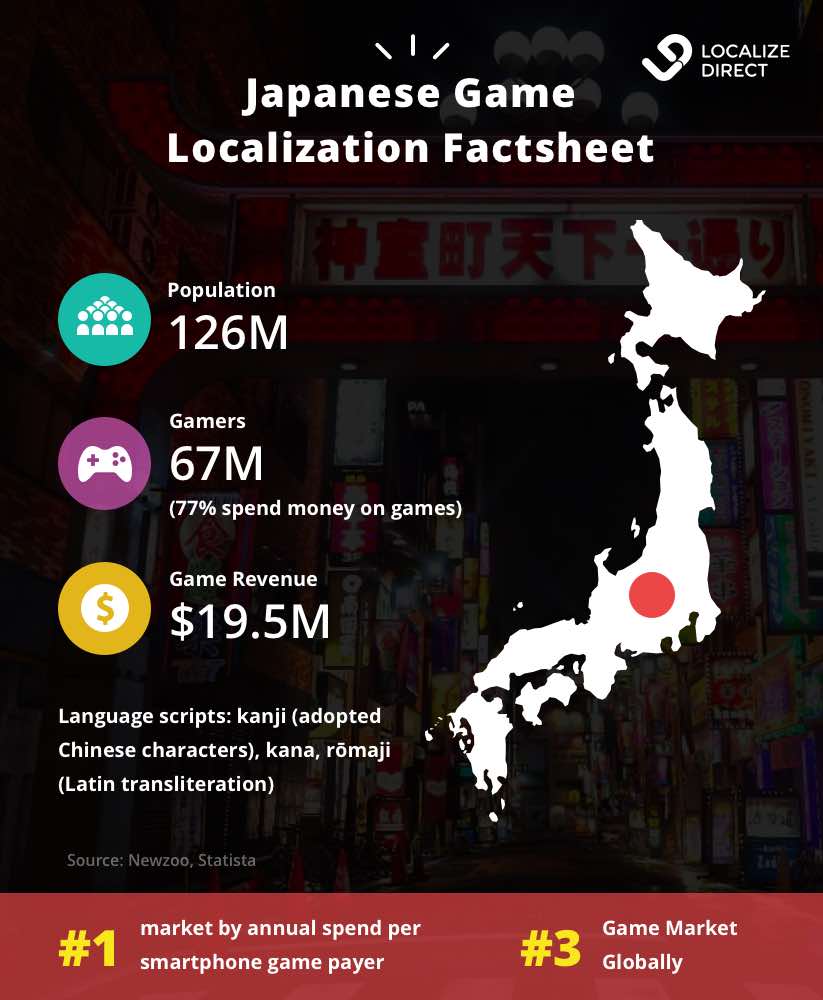 Why translate your game into Japanese?

Japanese is one of our top 10 localization languages due to the market’s high profitability.

77% of paying gamers spend money on in-game items or virtual goods. Mobile games are the most popular and profitable category. The annual spend per game payer was $371 which makes Japanese gamers the highest spenders in the world. 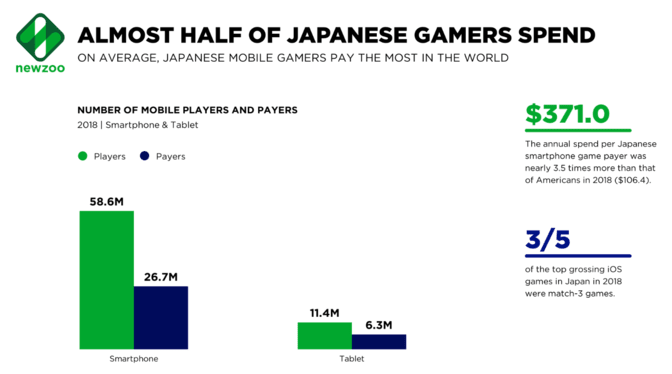 In Japan, both Google Play and iOS monetize strongly. In 2020, Japan accounted for over 20% of all global mobile game player spending from the App Store and Google Play. This shows what the mobile market in Japan can offer. 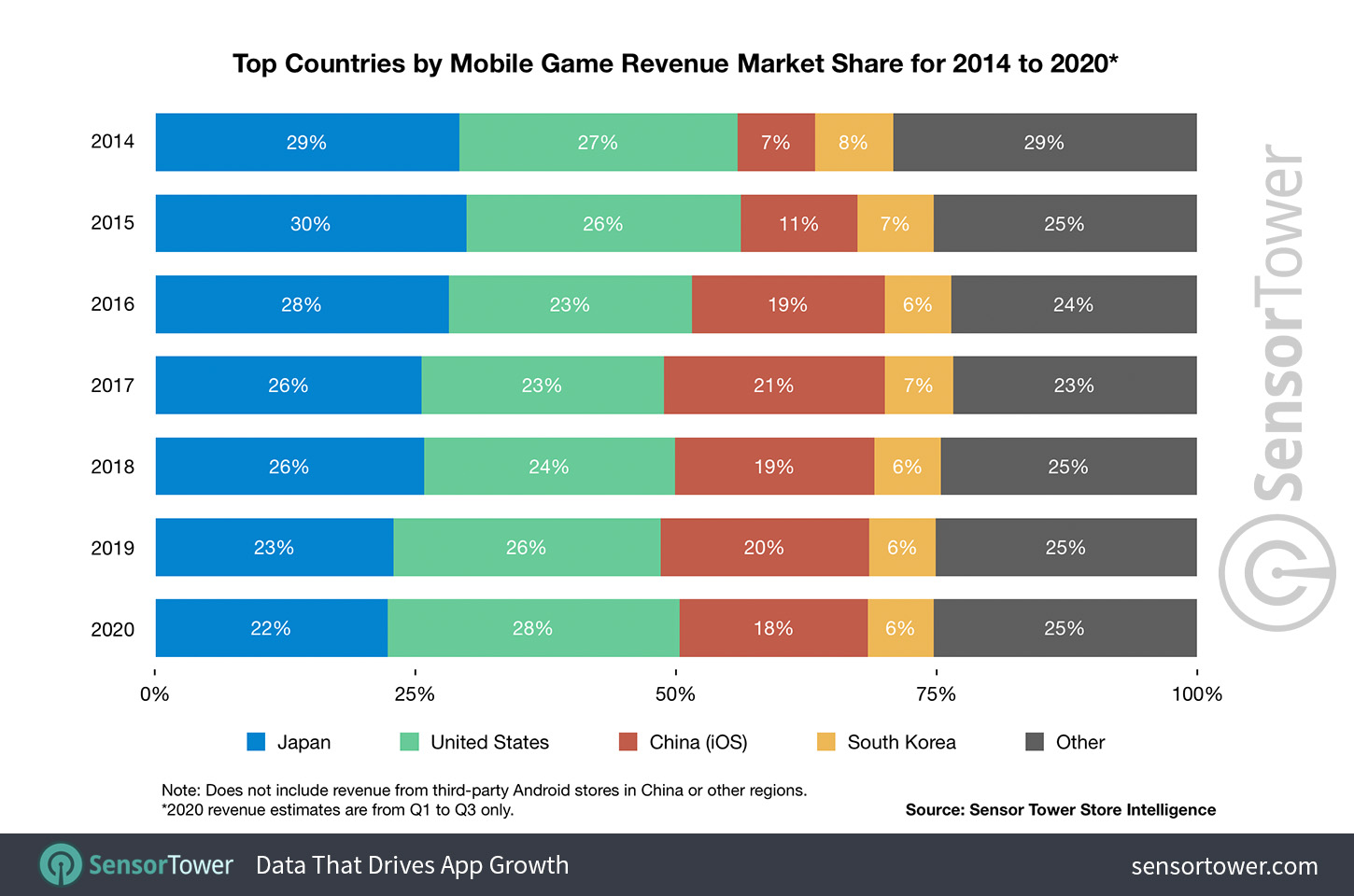 What are the most popular game genres in Japan?

A smartphone is the main games medium, with iOS as the first platform choice for Japanese gamers. The main reason is that consumers have a lot of time to kill when commuting and take this opportunity to play their favorite game. Capcom’s Monster Hunter had great success in Japan and pushed the portable device market forward.

On mobile devices, the most downloadable game genres in Japan were battle royale (party battlers), hypercasual, puzzles and action games.

In terms of the game revenue, battle royale is the highest money-generating genre followed by match-3, MMO strategy, and action games.

Interesting fact: A mix of different genres is a good way to attract the Japanese audience and increase retention rates. For example, Puzzle & Dragons is a card game with an RPG design which may be the reason it is the #3 grossing iOS title.

Japanese fans tend to really get into things they like and find investing in their favorite games worthwhile.

How do you localize your game to Japan?

It’s not possible to just translate games into Japanese. The text needs to be localized. Cultural requirements and norms must be considered, and developers need, from the start, to prepare the app for internationalization with local time, name format, date formats, and flexible text segments.

Japanese has a number of writing systems (kanji, hiragana, katakana, romaji), and two computer input methods which makes it pretty complex from the very beginning. Forget about old English-Japanese dictionaries: Japanese words change constantly, and the official kanji and kana spellings, as well as polite forms, are revised annually by the Japanese Ministry of Education.

Feeling confused? You haven’t seen an example from Wikipedia yet:

Some words use all three scripts in the same word. For instance, 消しゴム (Rōmaji: keshigomu) means “eraser”, and uses a kanji, a hiragana, and two katakana characters. Crazy, isn’t it?

Japanese is extremely regulated language. It has various politeness levels depending on the hierarchical status of the interlocutors, their relationships, social status, etc. So-called “neutral” Japanese can sound like a very polite and sterile language.

On the contrary, English source language tends to be pretty informal, which makes a direct translation for the Japanese market impossible - the text would be too abrupt. An imperative form is too strong in Japanese and might give the wrong impression.

Fun fact: Japanese has many personal pronoun uses, As a result, the use will depend on the situation in which the person is speaking and the qualities that s/he wants to possess (like masculinity, power, confidence, intimidation, etc.). “I” and “me” will sound different in professional or informal environments. People even mention their preferred pronouns on their online pages. 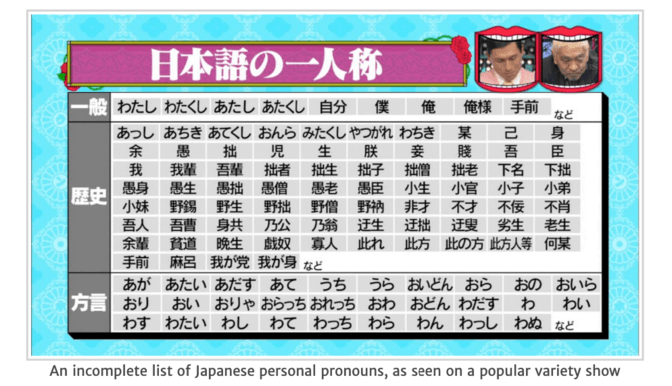 When localizing into Japanese, the text needs some extra preparation. Japanese requires strict rules on who is the speaker and who is the receiver, so as to translate properly.

Otherwise, it will make a male character speak in a female tone and a woman with a male voice. In Japanese, this makes the game plain and not enjoyable to play.

In Japanese, the order is “Subject + Object + Verb”, but that’s not applied in English. A sentence like “I game play” sounds odd in English, but that’s the order in Japanese. To improve the translations, put a placeholder in the source text:

Japan has a pretty low English proficiency score. Nevertheless, Japanese gamers accept English interfaces because they look cool. Check it out with your loc manager on whether full interface localization is necessary.

#6 - Forget about “translate everything” approach

Since English has been an important part of Japanese gaming culture, local players are used to English titles and phrases. Even more: gamers EXPECT to see English in the game and a game with no English may seem weird to them. English is accepted in menus, UX text and some messages to the gamers.

Some topics will be negatively received in Japanese video game culture.

Avoid promoting any religions, images of tobacco products and drugs in your game. Also, when using cultural elements or beliefs, double-check that they are Japanese, not Chinese (since they are often mixed up with the Chinese culture, and that’s something that Japanese gamers won’t tolerate).

Symbols and colors have important connotations in Japan. Four (4) sounds like “death” and 4 items in a package is negative. “W” is often used to refer to things that are doubled but also to may mean the word “laugh”, especially in online communication and live shows: “wwwwwww”

As much as storyline, Japanese players appreciate the quality of in-game graphics. The female audience like detailed graphics with pale and soft manga-like colors.

The video game industry in Japan is self-regulated due to criticism from the mass media. Even though Japan has rarely banned games, the titles containing many scenes of excessive violence have been edited. Two main standards to be aware of:

Example 1: Japanese CERO, responsible for the rating of video game content in console games, forbade PC Murder Mystery game from distribution via consoles as the player discovers that s/he is the murderer.

Example 2: The mission to kill civilians has been removed in the Japanese version of Grand Theft Auto: San Andreas.

Also, remove or tone down the blood (this is actually similar to the requirements of the Chinese authorities). On the contrary, the topic of suicide is not that sensitive in Japan as, let’s say, in the US. In Kingdom of Hearts II, Square Enix removed the depiction of the man threatening to commit suicide in its international version.

The more - the better. As one of our video game translators stated, “Even if it’s just 100 words to translate, give us plenty of references. Even a simple sentence can be translated 100 different ways”. Use a game CMS like Gridly where translators can directly ask questions is important - it will drastically improve the quality of localization.

Perfection is the key to make it in the Japanese market; if not perfect, then the product, app or game, isn’t trustworthy, nor the person trying to sell it. Companies that professionally localize English games for Japan are aware of this.

Should you localize your game into Japanese?

If your game is suitable for the Japanese market, then you don’t want to miss the 3rd largest market in the world. Check our translation services or use an interactive mapping tool to see what a translation into Japanese would cost.

Why You Should Localize Your Game For India ASAP [localization factsheet]

India is a true mobile-first market. It has the second-largest smartphone user base in the world and is home to 10% of the global gaming audience. In this blog post, we'll dig deeper into what you should know about the Indian gaming market, and how you can succeed in India, from language specifications to cultural context.