Korean Game Localization: How To Conquer One Of The Top 5 Games Markets

The new era, with a busy mobile market, creates a new pathway for many game types. The best part: the door to the Korean market is opening. Korea has historically been perceived as a mobile gaming heaven. In order to gain access and take a slice of the Korean gamer pie, game localization is necessary. The Korean game market is growing both in downloads and revenue. A video game translation into Korean is a good investment if you want to reach the Asian continent. 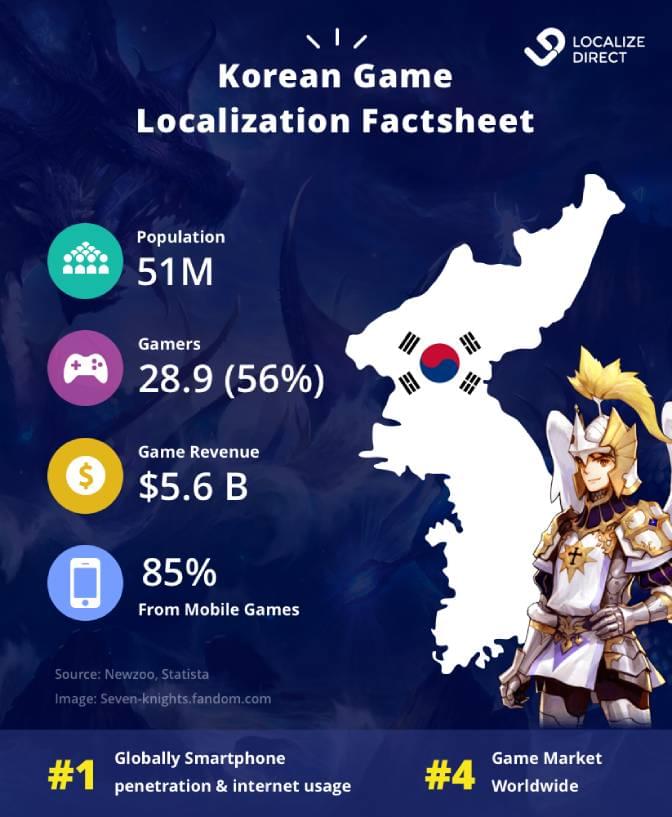 Of 32.3M gamers, almost half spend money on games. The average amount a Korean gamer spends on games is close to $220 per year; this makes Korean gamers some of the highest spenders in the world.

Mobile games were the main driver of total app revenue, generating 80%. It was the highest share compared to other Asian markets like China or Japan. However, in 2020, mobile games revenue is only 56% of the whole game revenue.

Even though the Asian market is huge, the game market has been difficult to monetize. In terms of geography, South Korea is rather small compared to a giant like China, but revenues are very impressive.

Revenues generated in 2020 was $7.13B. Let’s compare this with large game markets like Germany, the United Kingdom, Australia, and France – all with revenues below $4B. This makes South Korea the 4th largest game market in the world. 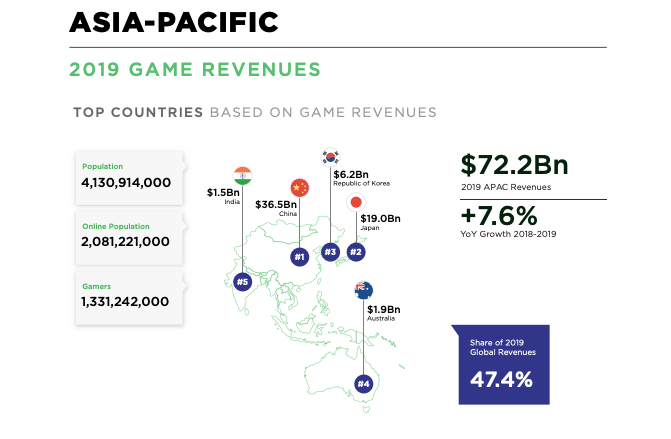 The Korean mobile market is growing at high speed

Korean consumers are fast adopters. 94% of Koreans have a smartphone, thus making it the #1 country globally in terms of both smartphone penetration and internet usage. 56% of smartphone users use their mobile device more than a computer or tablet. South Korea is on its path to 5G, and consumers have begun the transition to 5G devices and services. In the next few years, 5G is very likely to overtake 4G.

RPG is a trend. Popular game genres for men are MMORPG or RPG adventure games. Women play RPG too, but also puzzle, web board games and casual games. 3 of the 10 top-grossing iOS games are published by foreign companies, and all are strategy games.

Many Koreans commute using public transportation. You can see all ages, from youngsters to seniors, playing different games when traveling. Korean gamers prefer free to play games, but freemium is the business model to choose for a developer aiming at the Korean game market.

Why is competitive gaming so popular in South Korea?

Korean traditions are the opposite of Western ones. In the USA, and parts of Europe, individual performance is rewarded. That is not the case in Korea. In Korea and many Asian countries, the social aspect is very important and working as a group is vital.

PC bangs (gaming centers where gamers can meet and play multiplayer computer games for an hourly fee) are open 24/7 and are super popular in Korea, partly due to its social nature.

Games that allow the players to cooperate, and the gamer to play with a team, or to invite others to join the game, are the winners. In-app purchases that allow gamers to communicate with others are the games with a high ROI.

Why? Because they let gamers continue to play the game, even though they may have depleted their lives. The other members of the team are waiting to progress and to let them down is not a fun thing to do, the purchase is a given.

Korean is one of the top three Asian game translation languages. Professional Korean gamers tend to become very loyal to games with quality Korean localization. So it is very important to invest time and budget for this in the localization process.

The Korean alphabet is known as Hangul in South Korea. It consists of 24 consonants and vowel letters grouped in blocks. Every block consists of 2 to 6 letters, including at least 1 consonant and 1 vowel. The text is written from left to right, or from top to down (although the vertical writing is considered as outdated, and nowadays Koreans prefer horizontal writing).

However, if your game refers to the old manuscripts, consider writing them from top to down - and consider text placement too!

The order of words in Korean is completely different from English, so combining multiple strings instead of putting in variables does not work most of the time. For instance, the phrase “Select 3 out of 10 weapons”, in Korean, will literally sound as “Out of 10 weapons, select 3” because the larger number should go first. Taking into account their moderate knowledge of English, Korean gamers may find it hard to grasp the meaning of incorrectly translated English text.

Images in the game also need to be localized. Korean users like playing games in their own language, so culturalization/localization of in-game design elements is very important to them. Especially, if they can spark controversy (we’ll touch upon that later).

#4 Do a linguistic test before publishing

An example: In 2018, Darkest Dungeon caused anger and resentment among gamers in South Korea due to its multiple mistranslations (despite it being reviewed as 9/10 on Steam). For instance, the original phrase “Claim your birthright” was translated as “Find your life” (네 삶을 찾고). As well as many other instances. 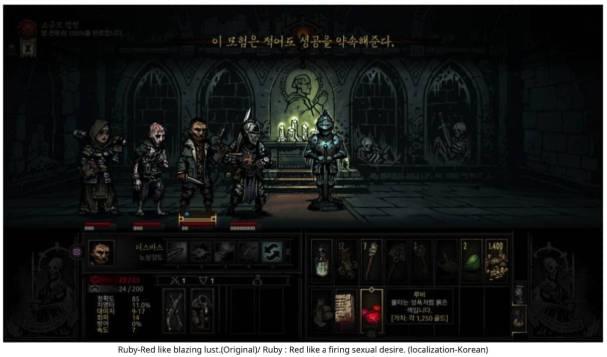 …And this is the reaction of Korean gamers:

This made the gaming company apologize publicly.

Unlike China, South Korea is a pretty liberal market respectful to freedom of expression and speech. Nevertheless, a few games were banned for violence and cruelty (Manhunt, Mortal Kombat). Apart from that, politics (especially topics related to the Korean war and relationships with China and Japan) can cause a lot of controversy, like Persona 5.

How much does game translation into Korean cost?

English to Korean video game translation and localization services start at €0.12 ($0.14) per word - the price is the same for VR, console games or mobile game localization.

Localizing to Asia, we recommend simultaneous translation into Japanese and Chinese (Simplified for PRC and Traditional for Hong Kong, Singapore, and Taiwan).

Android has the majority share with 72% of the operating systems in use, and Google Play a great share of the revenue. The tricky part is, to succeed in Korea, a social component in the game is necessary. Almost every smartphone sold in Korea uses a messaging system called KakaoTalk. And many top-selling apps are from Kakao.

KakaoGame is the second-largest channel for mobile game distribution after Google Play. With a base of over 50 million users, Kakao has the capability of delivering even small games to a huge number of people. Game devs can sell their games through KakaoTalk via their revenue-sharing model.

Interesting fact: King launched its Candy Crush Saga for Kakao in 2013, developing special features for the Korean gamers like sending requests to friends via KakaoTalk or sharing exclusive emojis. 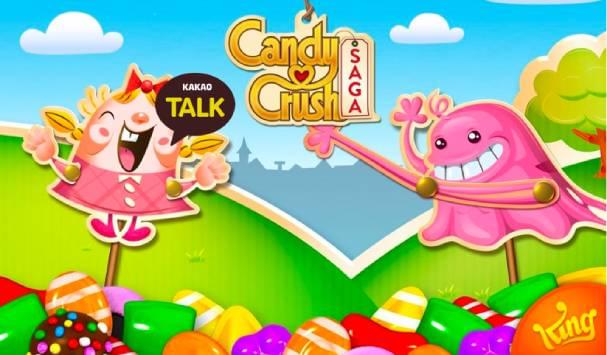 Important: Kakao is pretty strict when considering the publishing of new games or apps. The company tests the game first and can reject it on the grounds that “the chosen art and setting are not near enough to our users”. The same applies to language: your Korean localization should be impeccable. Your game may only be tested for a short period of time but even one mistake may cost you access to 44 million Korean Kakao users.

KakaoTalk is an important piece of the social factor puzzle when releasing a game in Korea. Korean gamers share scores, invite friends to play, and a good game promoter will leverage virtual money to buy more in-game features. Wanna boost your game downloads? Use Kakao.

Is it worth localizing?

Yes. A fantastic opportunity for non-Korean developers to enter the Korean game market has arrived. The door is about to open, and you want to assume the best market placement available.

All in all, even though South Korea is dominated by local game publishers Netmarble, NCSOFT, and NEXON, it is a way more open to Western titles compared to China or Japan. Social networking and perfect localization is the key to conquering this Asian market.