It’s a common misconception that developers have to go with a publisher to be able to bring their games to China. While local publishers do indeed make it a smoother process, especially with the hassle with regulations and payments it’s not mandatory. Indie developers or independent game studios can expand to the Chinese market themselves. And here we explain how to do it in the easiest way possible.

How to distribute PC games in China

If you are a developer mainly publishing PC games, congratulations! PC gaming is a huge market in China (324 million gamers spent $14.6B on PC titles in 2019) and publishing on PC stores isn’t a very complicated process.

Steam, Epic and WeGame (Tencent) are the main publishing platforms when aiming to reach Chinese PC gamers. But which one should you choose?

In total, there are 30,000 games published on Steam. And 37% of Steam users set their default language as Simplified Chinese. If you want to attract Chinese gamers, you should follow these tips and also run an LQA pass to make sure there are no UI/UX/linguistic bugs in your game.

Good to know: In Steam China Policy Configuration, the game should support test filtering. It is required to enable steam anti-addiction/duration control for the game. You should enable pre-launch warming(required if the game doesn’t have a built-in-pre-launch health warning).

Just like Steam, the Epic Games Store is a big PC game publishing platform in China. But there’s a fairly well-known difference between them financially. Game developers retain a greater revenue share on Epic than on Steam. Developers receive approximately 65-70% of Steam revenue, this also depends on which game engine developers use. Whereas developers receive 88% of the revenue on Epic for both Unity and Unreal games.

If you choose to distribute your game on Epic, bear in mind that Epic has a smaller market share than Steam in China. Always remember to support Traditional and Simplified Chinese before you release the game.

If you are sure that your game does not contain any political or cultural controversies (like defamation of the Chinese government, blood, skulls, gambling elements etc.), and if you’re aiming at as broad an audience as possible, then we recommend WeGame with its 300 million users.

WeGame is owned by Tencent and is a 100% Chinese local platform. Basically all kinds of game genres are accepted as long as they meet their quality standards. Your title needs to go through their approval process. After your game is reviewed and receives approval, you can start to sell it.

Only companies can submit games to WeGame (individuals won’t be accepted). In order to publish and monetize your PC games in China, you should register a company in China, get GAPP (General Administration of Press and Publication) approval and an ISBN license.

Theoretically, you don’t have to have a local partner when you register the company in China, and you can do it online. But according to our research, it is very difficult for foreign own studios to get the license.

Image: Approval number and ISBN example from “Game For Peace”

If you don’t know how to register a company in China (Shenzhen), check this website (use the Google Translate browser extension for easy translation).

The whole process consists of 5 steps, and here’s what you’ll need to do:

You may well need the assistance of someone who speaks Chinese to fill in all the forms. You can however prepare the answers beforehand in English.

Always check your game for compliance with Chinese censorship rules and Chinese law.

How to work with Chinese indie game publishers?

If you feel that the registration process described above is too complicated or you’d like to have some support with marketing your game in China, you can of course go with a local publisher.

There are several high-quality Chinese indie game publishers and game companies, such as HeyBox, Zodiac etc. In this guide, we will take Indienova as an example, which is a key ARPG publisher in China that has lots of experience with foreign games. They focus on the strategy/storytelling games that people tend to play for a long time rather than on the hyper casual games that people regularly only play for several weeks.

If you want to publish on Steam, they will tailor your marketing support and manage your Chinese community and social media. If you prefer WeGame, as long as your game passes their evaluation, they will do all the administration paperwork for you, plus operate your game. 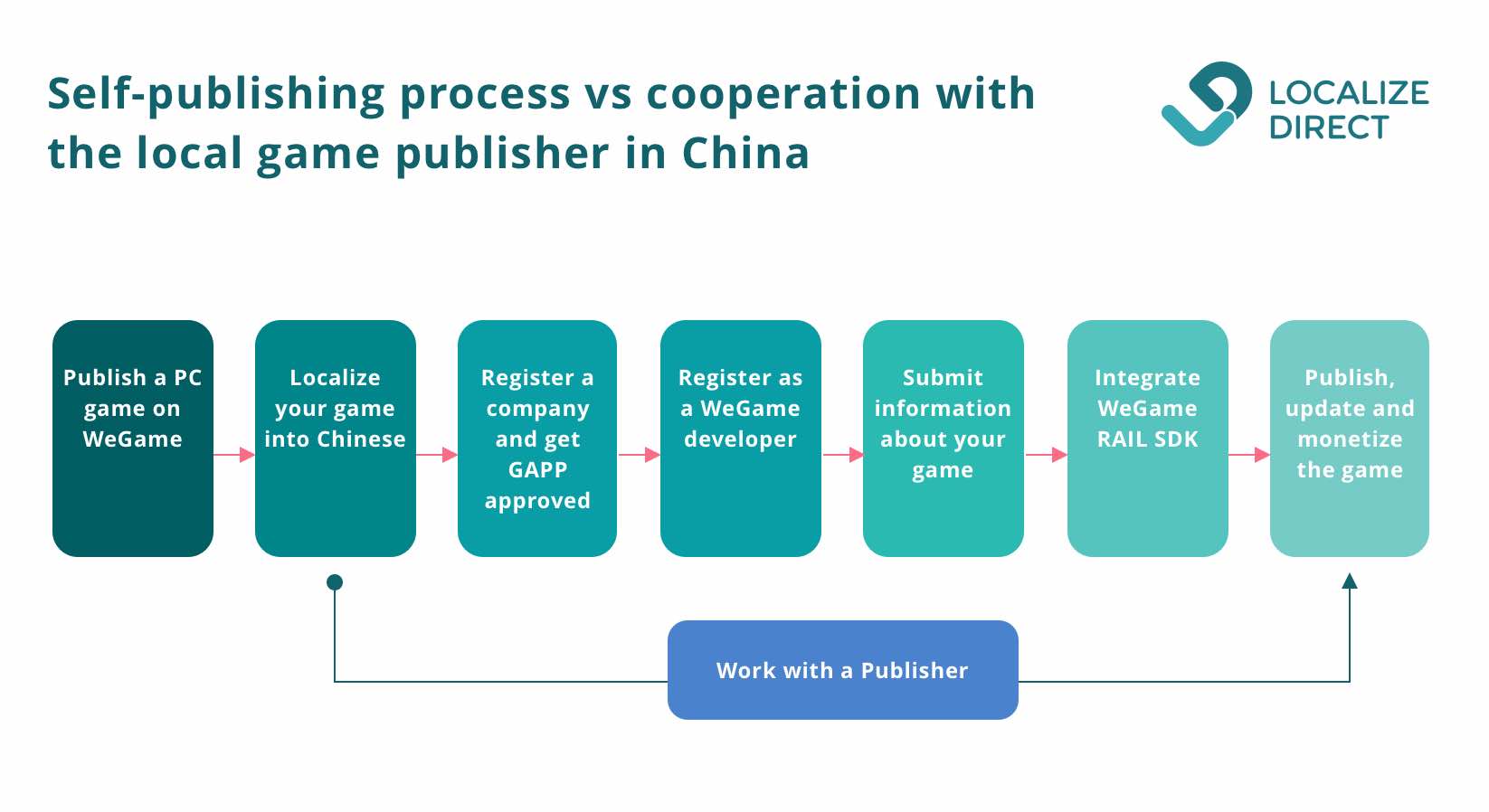 NB: Regardless of the platform you choose, remember to localize your game into Chinese. It’s a crucial step in bringing your game to China as Chinese gamers rarely speak foreign languages.China shouldn’t be classed as a simple slot machine where you can just insert a game and possibly get cash back out. First of all, you need to localize your game into Chinese (ideally both simplified and traditional versions) and then adapt some of your content for the local market. More suggestions can be found in one of our previous blogs.

How to publish console games in PRC

We’ve noted that console games aren’t as popular as mobile and PC games in China. However, according to Niko Partners, China console gaming market will approximately reach $2.15 billion in 2024.

These are 2 main reasons for this:

In December 2019, Tencent (one of the biggest game companies around) announced that they and Nintendo would cooperate in selling Nintendo Switch consoles in China.

We can assume that this will push the market forward but it is still difficult to predict console market growth in China at present. Nevertheless, we believe that consoles have a promising future in China.

What platforms to choose for console release in China?

Microsoft allows pretty much everyone to create and publish Xbox games. If you are specifically interested in the Chinese market, we recommend E-Home interactive, which belongs to Microsoft and it is the largest publisher on the Chinese Xbox One platform.

Nintendo has its own rules and regulations you have to agree to. Luckily, it’s free of charge and all the processes are pretty clear on the NS website.

Sony stated that all PS4 developers maintain complete “end-to-end” control over everything, which implies that all developers are publishers.After you submit your game, it will take several weeks to go live. During this time, you can start to promote and organize your sales push.

How to publish a mobile game in China?

Mobile games in China have an overwhelming market share because a staggering 95% of gamers in China actually play mobile games.

As there are over 600 games published on AppStore and Google Play every day, it’s quite difficult to make your game gain traction. To aid with this, first, make sure your game supports Chinese (both Traditional and Simplified) and your metadata (store) text is translated into Chinese too. Then you have a binary choice. Either find a trusted and experienced Chinese publisher who understands Chinese law, gamers, tax, monetization, etc. or you do it yourself.

Option 1 - Work with a publisher

If you go for option 1, your publisher will help you oversee the launch, distribution and promotion of your game in return for a revenue share. You should find a publisher who understands and has experience with your game genre. Some publishers only work with F2P while some purely focus on ARPG.

The relationship between you and your publishers is not a one way street. They will of course help you reach the Chinese market, but your game will also help them. They have goals to achieve - perhaps gain a larger market share, influence, revenue, etc. Just like a dating match, it’s not easy to find Mr./Mrs. Right publishing partners that have synergistic goals.

Where to find a publishing partner? In the game industry, the best matching platform is ChinaJoy, the largest gaming exhibition held in Asia. There you can meet local publishers and pitch your project to them.

If you like challenges, don’t mind tons of paper work and decide to publish your game independently, then you should know there is one AppStore and over 400 Android platforms available in China. Just like publishing a PC game, you need to register a company in China and get an ISBN number (game license). The processing time will take around 6 months. According to our research, educational and casual games are easier to get ISBN. Location-based games may not work in China because Google Maps are not supported in mainland.

No matter whether an iOS or Android game, as long as you plan to publish your game in China, you need to follow all rules enforced by the Chinese government and satisfy the requirements from SAPPRFT (China’s State Administration of Press, Publication, Radio, Film, and Television).

In order to protect and prove your game copyright and trademark, we suggest you get a software Copyright Certificate (SCC). A Chinese SCC helps you remove unauthorized copies of your app that aim to use the same or similar name. Unfortunately, you can’t use a current SCC from other countries as the Chinese Copyright Administration Bureau will not recognize it. Please keep in mind that you need one SCC for each game and the waiting time is 2-4 weeks.

Important: The mandatory ISBN policy is applided since July 1, 2020. If you don’t have an ISBN/Game Registration Number (GRN), your game will be removed from the app stores or the in-app purchase will be invalid. After you receive the license, you just need to go through the regular process: uploading your .apk package and some paperwork to different platforms and wait for approval.

You can also use third-party app stores or game distributors. For instance, Taptap is highly recommended by lots of developers. Taptap collects official packages and supports paid purchases of genuine Android games. You don’t have to submit an ISBN during the pre-release stage but as long as your game is open to download, ISBN and copyright are required.

What are the best channels for promoting your game to Chinese gamers?

OK, let’s imagine you have everything you need to publish your game into China. What’s next? Marketing.

Like anywhere else, you may need to invest in app store optimization and mobile or in-app advertising. But in China, traffic sources are different.

According to Mobvista research, 77% of Chinese mobile users use Tencent (Wechat, QQ, etc.), Alibaba (Taobao, etc.), Baidu, and Bytedance (Tiktok, TouTiao) and UC browser. Since the main search engine in China is Baidu, which has different SEO rules from Google, you may need to use other strategies to drive awareness.

In summary, publishing your games in China is big business and one shouldn’t assume it’s a simple process. It’s quite different from Western markets or other Asian markets. This is a hands-on guide instead of a publishing bible including assessment, operation, monetization and performance analysis. Regardless of whether you decide to DIY or partner up with a publisher, always keep in mind that localization is always a major consideration if you want to achieve success in China.