Pixelbite Studio: "We were told our game wouldn’t sell in China. What happened next surprised everyone else except us!"

“We were inspired by games like Darkest Dungeon and XCOM, especially for the base management and recruitment parts.”

LocalizeDirect: Tell us a bit about your new game - Xenowerk Tactics.

Anders: It’s sort of a mix between our previous games Space Marshals and Xenowerk. It’s built on the story of the Xenowerk but Xenowerk was more of a shooting and action game, this one is a bit more strategic and tactical. There is a strategy element where you manage a basecamp, upgrade and recruit new operatives, and then you send then into the field, and in the field it becomes a tactical game for you.

Mattias: It’s a mix of many games. We were inspired by games like Darkest Dungeon and XCOM, especially for the base management and recruitment parts. If we could get the player to care for the recruits the same way we did when playing those games it would be great. To hopefully achieve this we added unique traits and mutations to make each recruit feel more unique and valuable. For the combat side of things, we took inspiration from various RTS games and old-school RPG games like Baldur’s Gate.

LocalizeDirect: When developing your games, how often do you roll out updates?

Mattias: Not very often. For some games like Space Marshals - we have 3 content updates in a year.

Is localization the last step in the production process?

Anders: Yes, one of the last ones together with bug fixing and tuning, when most of the production is finalized. But we are aware that we are going to do localization from the very beginning. We try to tag the strings in the game that need to be localized so it’s flagged for future localization. It’s an internal code thing.

LocalizeDirect: Do you do game QA testing?

Mattias: Not that much on localization - we trust our translators. We play our games ourselves: switch languages and check if the text matches the boxes and everything looks alright. But we do not understand a translated text, of course. We are doing our localization testing on the couch (laugh - LocalizeDirect).

So, it’s about the visual testing. You see if all the buttons have text etc.

Anders: Yes, to see if something is missing and estimate if the font size is readable, especially for the Asian languages. We have to resize some strings (text) if we don’t want them to have a new line.

As the developers, what are the main pain points you experience in game localization?

Mattias: Adding the localized content and localization ID into the database.

Anders: …and finding all the places if something is missing. If we missed that “secret tag” somewhere and it becomes English.

How do you import strings?

Mattias: Copy and paste. We do testing, and then if we see that translation is missing, we know where it comes from, so it’s not hard to find them. But we need to find which to look for so to speak. Once we find them it’s pretty easy to fix and add them in LocDirect.

Anders: Long strings and long words can be a problem. In German, the strings can be longer and if we don’t want to add a new line, we should retranslate it in shorter words if possible. If the UI isn’t adapted for having long strings, retranslation is the only option.

Mattias: A three-letter word in English can turn into the nineteen-letter word in German - that’s a bit frustrating. And it happens all the time (laugh - LocalizeDirect). We always try to have the fallback how to write text so either we are going to scale down the text or we are going to wrap the text in new line. And we try to make the design in the way so that we don’t have anything on the right side of the text, try to leave the right side empty.

In QA, we try to split roles in the team. One is checking if the text fits and is translated, and other fixes it. We have a lot of text, more than 11,000 this time. UI programmers are dealing with a lot of text wrapping.

And how many days does this process take?

Anders: We test in-house - play the game, and if we find something inconsistent, then file the report. We make sure that the game looks solid but we are not digging into the details. It’s kinda what we call the ad-hoc or spontaneous testing - we don’t have the test guide to follow. It’s boring (laugh - LocalizeDirect). 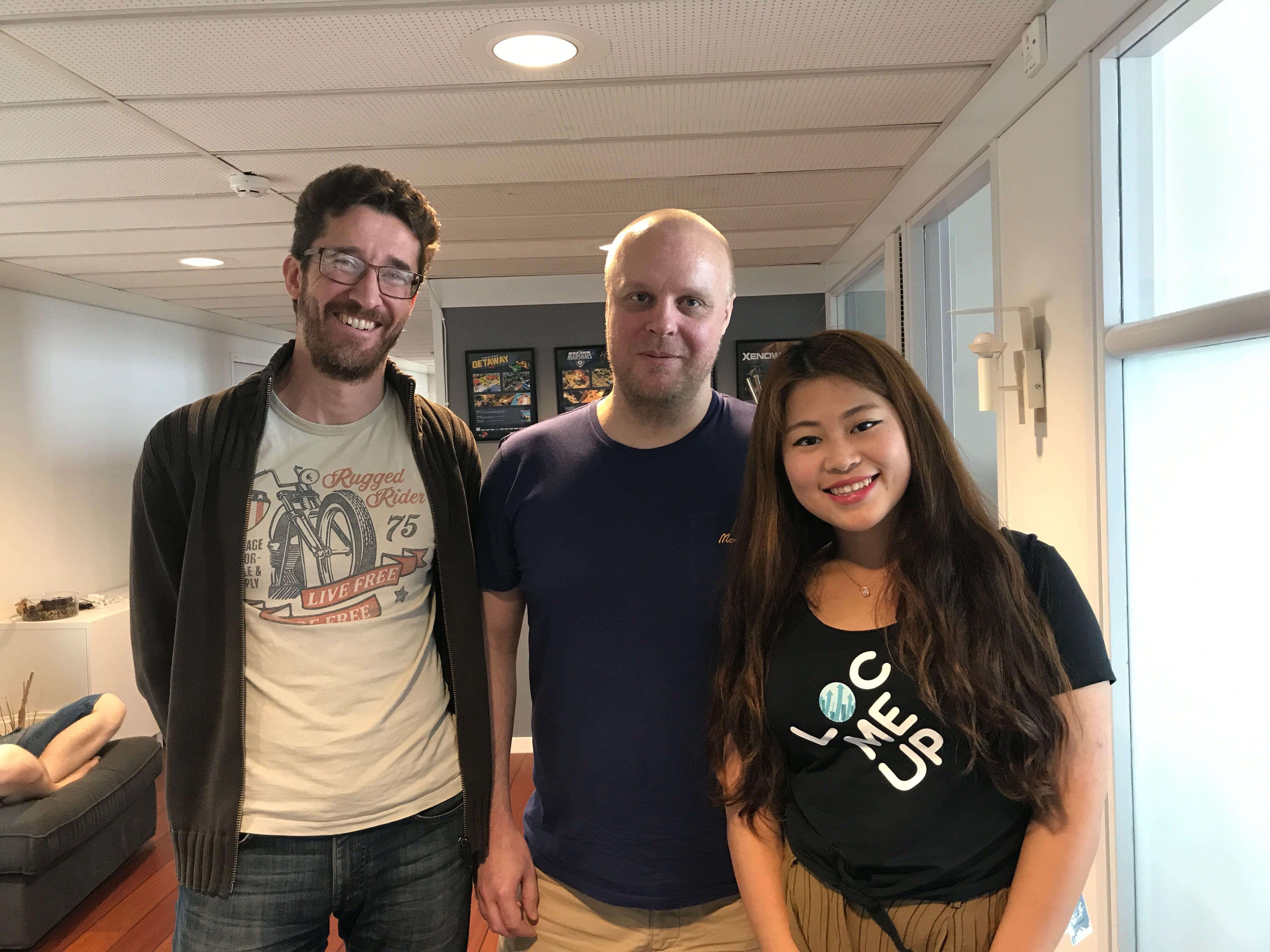 “In the localization CMS, backup, the history of all changes, and the search function would be important”

LocalizeDirect: When do you use any CMS tools?

Mattias: Usually, we don’t use a localization tool at all until later in the production process since it’s so much hassle turnaround to not have text in a tool, and there are a lot of rapid changes that we can’t deal with when we are developing. So, we do it usually near the end of the process.

If you were to use localization CMS, what functions would you need?

Mattias: In LocDirect, we only use the text module where backup, the history of all changes, and the search function are important. Nice-to-have functions are: portraying the conversations between different characters for the translators. If you have a conversation with 15 lines of text, you can do it by naming the strings’ IDs correctly but having the timeline when this person says that and that person says that, and then this happens, would be nice to have.

Now we have it only in string IDs, and then have to write the comments manually like “These 15 lines of the conversation is between these characters and this happens”

Anders: Mostly to give a context to the conversation, perhaps they refer to something that’s been said earlier, and that can affect the translation of future strings and so on.

Mattias: Perhaps an easy way would be to add a screenshot to the text to show what’s displayed on the screen to clarify it for translators so that you don’t have to add long comments explaining. Having screenshots can be efficient but for, let’s say, 12,000 strings is not gonna be effective.

“The US, Russia, South Korea, Germany, China are definitely top 5 for us”

LocalizeDirect: What markets performed best for your game Space Marshals?

Mattias: We don’t know why but Chinese market liked us. We had some publishers looking at us before we were listed (1st and 2nd round), and they told our game and the theme wouldn’t work in China. And then we were nominated for the game of the year on the App Store. Now China is one of our best regions in the world. We also hope it’s gonna be success for Xenowerk Tactics.

Space Marshals was a P2P game. Besides China, what are other regions that performed best in terms of revenue and downloads?

Mattias: The US, Russia, South Korea, Germany, China are definitely top 5 for us.

When making a decision about localization, what data do you base your decision upon?

Mattias: Historical data, numbers: we look at the games and the languages.

We noticed many Arabic developers at Gamescom this year - seems it’s gonna be a big market. Any plans for that?

Anders: The problem with Arabic is the text direction: they write from right to left. That’s the main issue that creates so many problems for UI. We have had requests on the support side “Oh, why didn’t you localize the game into Arabic” but it’s a big deal for us.

Mattias: Although we’ve heard that many use a technique to mirror the screen. You can still write from left to right but you mirror that.

Do you see any trends in the markets? Any markets that are disappearing?

Mattias: More like new markets are growing and the share of the established markets is shrinking. Asia has grown considerably for us in the past years, mainly China and South Korea. Italian is perhaps not a worthwhile spend any more.

Xenowerk Tactics is launching on both iOS and Android. It’s a single-user game available in 11 languages that can be played offline, with a premium experience at $6.99 and no ads.

Download Xenowerk Tactics on the App Store for iOS and on the Google Play for Android.

As a game localization company, we have helped over 600 games companies localize their games from English to Chinese. Just localizing your game into Chinese (Simplified) doesn't necessarily mean that you have entered the market successfully. In this guide, we'll explain how to get fully involved in the Chinese market and publish your game successfully on various platforms (PC, Console, Mobile).