Let’s be honest: you may be a superb game developer or lead a team of extraordinary talents, but your team probably doesn’t speak all the languages you are going to localize your game into.

So, how can you trust that your translated game is as cool as the original and the gamers enjoy it as if created in their own language - perhaps with all those witty puns and creative jokes? Here’s where the localization QA testers step in. Keep reading to learn why localization testing can be a game-changer for your title.

What is game localization testing (LQA)?

In short, native speaking linguists with expertise in gaming and local culture play and review your game, making sure that there are no errors or problems - both linguistically and visually.

If the game is about to be published in multiple languages, every version should be tested by the appropriate native professional.

Note: It’s especially important for languages that have two and more variations - European and Brazilian Portuguese, European and Canadian French, European and Latin American Spanish which can differ in Mexico, Argentina and Peru.

For instance, a general Spanish linguist can test the game for the South American market from the perspectives of grammar and punctuation. But he may not be able to play around with local jokes, celebrities, and specific cultural references.

LQA confirms that the game is localized to all the desired languages, all strings are translated, the terminology meets the hardware manufacturers requirements, and no implementation issues are found. Plus, it makes sure that the translations are done with a natural flow and consistency.

What does game localization QA include?

Linguistic QA and Visual QA are the integral parts of localization quality assurance in games. While not the main objective of LQA, functionality issues or bugs are regularly picked up and reported as well. 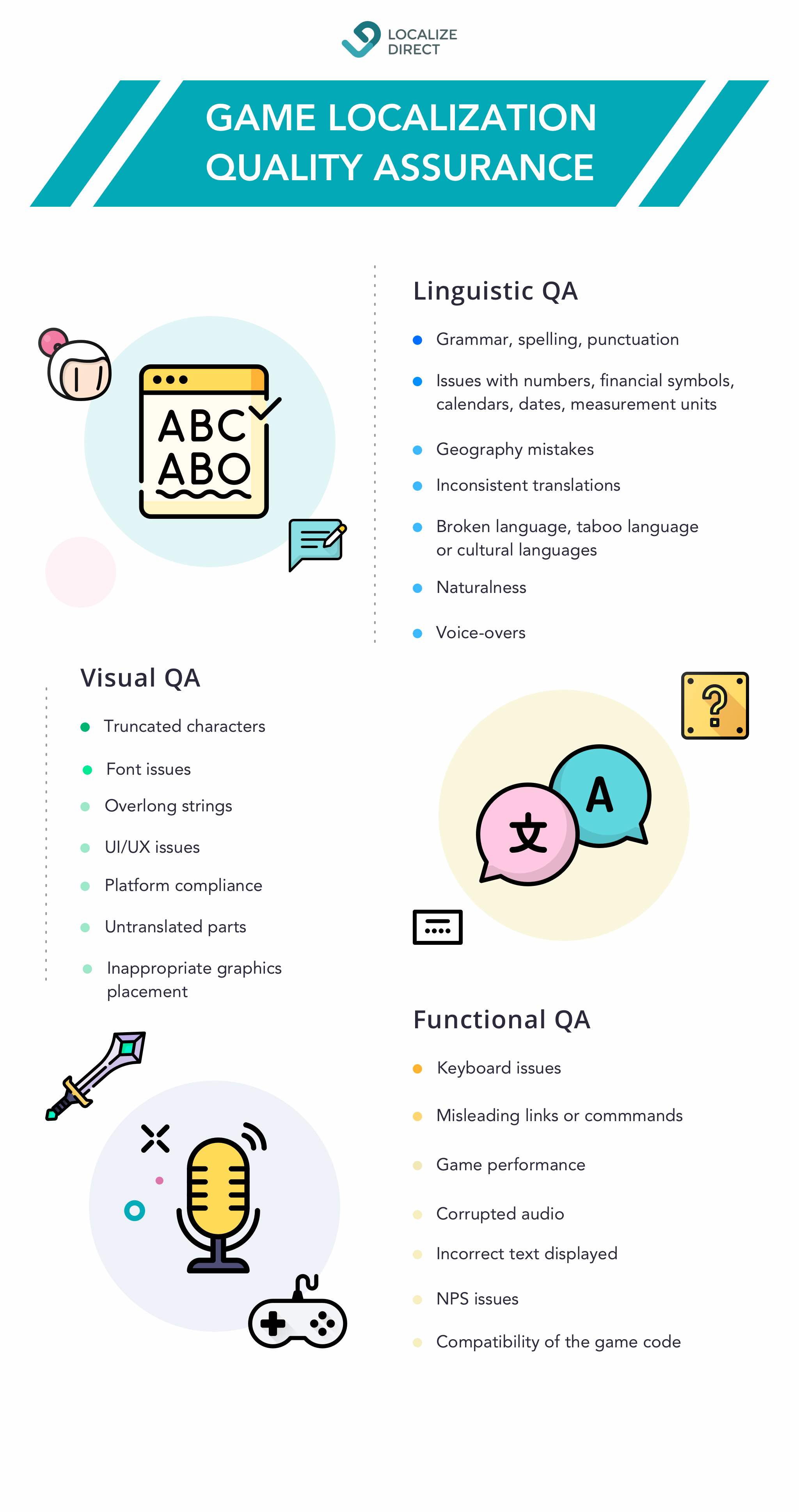 Linguistic game testing targets mistakes in game scripts and voice-overs. Typically, those are spelling, grammar errors, and mistranslations. In the end, the linguistic QA testers suggest how to fix them or provide alternative translations.

The typical language-related bugs in localized games are:

Example: “Fatal Fury Special” was full of funny phrases, mainly because of the literal translation from Japanese. Like this one: “Your fists of evil are about to meet my steel wall of niceness.”

Visual QA testing checks for any design-related issues, amongst them:

Functionality QA testing (FQA) targets any art, graphic or engineering bugs to be fixed with a code change. For instance, if the game was not localization-friendly from the very beginning or does not use Unicode, the bugs related to how the special characters are displayed will be frequent.

Other most common issues include:

Good to know: This classification is pretty general, and often LQA testers are looking for all the issues in one batch of testing (especially critical bugs that prevent them from accessing the localized assets in the game).

At LocalizeDirect, we developed the following localization testing program: 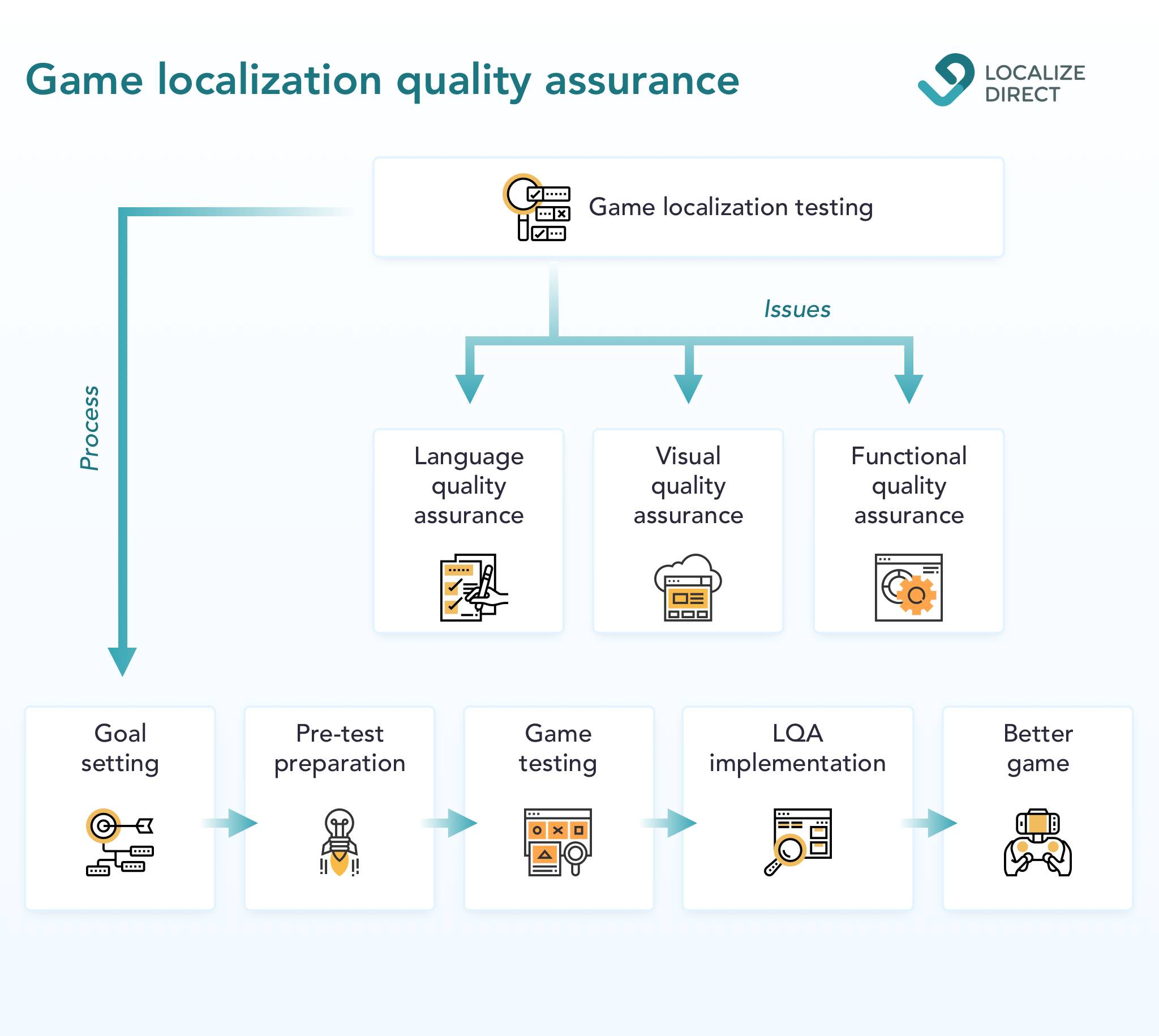 When the linguistic QA specialists test the game in a few languages, they often do a “crosscheck” - to find out whether the bug is repeated in other versions.

Bear in mind: Some bugs may not be reproducible and could reappear even after the LQA has been conducted.

How many rounds of game testing?

Despite the popular belief that LQA testers are gamers that test the game simply by playing it over and over, they do in fact have specific tasks given by the clients to minimize the amount of work. The developers/owners of the game decide themselves how many levels gamers should check, and how many rounds to pass.

The LQA plan is customized for every title and depends on the number of language assets the game has, its game size, and which languages are to be tested.

Thanks to this customization, a comprehensive LQA process allows for a more accurate evaluation of the effort needed, often saving costs and unnecessary extra rounds of testing.

What are the LQA rates?

The LQA rates start at €33/hour for Arabic, Chinese, LatAm Spanish and can reach €40/hour for Swedish or €35-37/hour for some languages like Japanese, Korean, Turkish (it’s LocalizeDirect data). 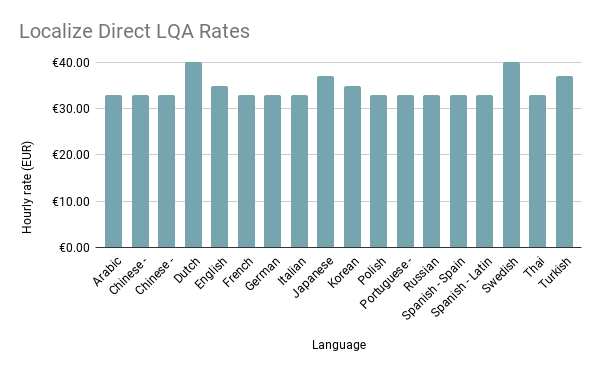 Important: Translation and LQA should be performed by different people - to eliminate the human factor and bring a fresh viewpoint to the game. If you order both translations and LQA from the same video game localization agency, make sure that those services are provided by two separate project teams.

Again, it doesn’t mean that, let’s say, Swedish translators can’t test games in Swedish at all. They just should NEVER localize and test the same game title. We believe that the best game localization testers are translators who love playing games but we make sure that they test games translated by others, not by themselves.

When you may need the LQA service?

Why not proofreading? Proofreading is not enough as it won’t show whether the localized text is displayed properly in the game. Reviewing in context, also grants the unique capacity to decide what is the best translation possible.

Why should you consider LQA for your game?

Simply: to save costs, avoid negative reviews, and have happy gamers. Finding and fixing bugs before the game publishing is always better than urgently fixing them live.

Especially, if you invested years in developing one game, like Star Trek (2013) that was released a month before the “Star Trek Into Darkness” film. The creators spent three years on its development but the game did not perform well. This was regularly attributed to the numerous bugs and glitches found. In three weeks, it sold only 140,000 copies and amassed a pile of bad reviews.


Of course, there are hilarious awesome mistranslations like "All your base are belong to us" or "Welcome to die!" that went viral, entertaining gamers for decades and becoming an inspiration for many remixes, memes, and jokes. And we love them, too! But would you really like having your games remembered because of that?