Transcreation vs Localization: Definition And Examples From The Video Games Industry

To start with, let’s define what transcreation is and what makes it different from translation and localization?

Transcreation vs. translation vs. localization

Translation means rendering the text source in another language (with slight modifications).

Localization is adapting a product to a particular culture or language.

Transcreation and localization have some similarities. They both have a focus on local target audiences. But, transcreation goes into the details of the specific language and culture.

Transcreation lets you create content for the local target market and also adapt to all the nuances of the target market’s language. This may include but is not limited to idioms, speech, and phrasing. Yet, it is necessary to preserve the idea of the document, webpage, app, or game.

1. Transcreation is more creative than localization or translation. In localization, the linguist makes choices to bring the text closer to the player’s reality, such as changing names, metric conversions, etc. but it will not create completely new content. The transcreation allows the linguist “extra” freedom in the process to re-create the content. The text may change completely, but it will still maintain your product’s tone of voice.

2. Emotional components play a more crucial role in transcreation. Transcreation allows for significant changes. But the text still needs to evoke the same emotions as the original.

3. The created content during the transcreation process is different. Let’s take the American English localization of the Japanese video game Final Fantasy X as an example. The game contained many different weapons. Each weapon had a unique name. Translated weapons must be within a limit of approximately 15 characters.

One of the weapons was a blade called 風林火山 (fūrinkazan) - an expression made up of four characters that mean ‘wind, forest, fire, and mountain’. In Japanese, it means: “as fast as the wind, as quiet as the forest, as daring as fire, and immovable as the mountain.” Since it was more than 15 characters, re-invention was necessary. The American translators decided to go with the simple name ‘Conqueror’. It was completely different from the original but a decisive choice in English.

When is the transcreation of video games needed?

Generally, transcreation serves text adaptation in cases when simple translation won’t preserve the idea. For instance, when we want to get out a universal message to players in their national context. This helps to improve the user experience by enhancing the games through local idioms, remarks, cultural references, etc.

The video game industry may use transcreation in several instances:

Transcreating the names of the characters may add another layer of authenticity to the user experience. For example, in localization, if the English game is translated for the Portuguese-speaking audience, the name Joseph can be turned into José and Mark changed to Marcos. However, in transcreation, for instance, Shaggy Rogers from Scooby-Doo will be translated as Salsicha in Brazilian Portuguese, which basically means sausage/hot-dog.

A simple example is adapting some of the items players can use in the game Mario Kart Wii. There is a special shell that ‘attacks’ the player causing them to lose some time during the race. The item name is “Spiny Shell” in the English version. In French, it translates to the “Caparace épineuse” game. In the Spanish version translated as “Caparazón azul.” This is to reference the shell’s color.

Janet Hsu wrote on the Capcom blog about the game Ace Attorney’s localization. In the game, a character named Pearl isn’t very good at reading complex Japanese characters. She misreads 華麗 (“karei” – gorgeous, magnificent) and 引導 (“indou” – last rites, funeral). This is due to the similar-sounding words カレー (“karee” – curry) and インド (“indo” – India). So she understands the sentence as something to do with “Indian curry.” Yet, in English, she gets “gravely” and “(to) roast” mixed up with “gravy” and “(meat) roast.”

Transcreation and poetry: a case study of Fledgeling Heroes

Let’s take a look at the game “Fledgeling Heroes” that we at LocalizeDirect localized. The game, developed originally in English, consists of numerous rhymes and puns which should be translated into other languages as poems, not prose. 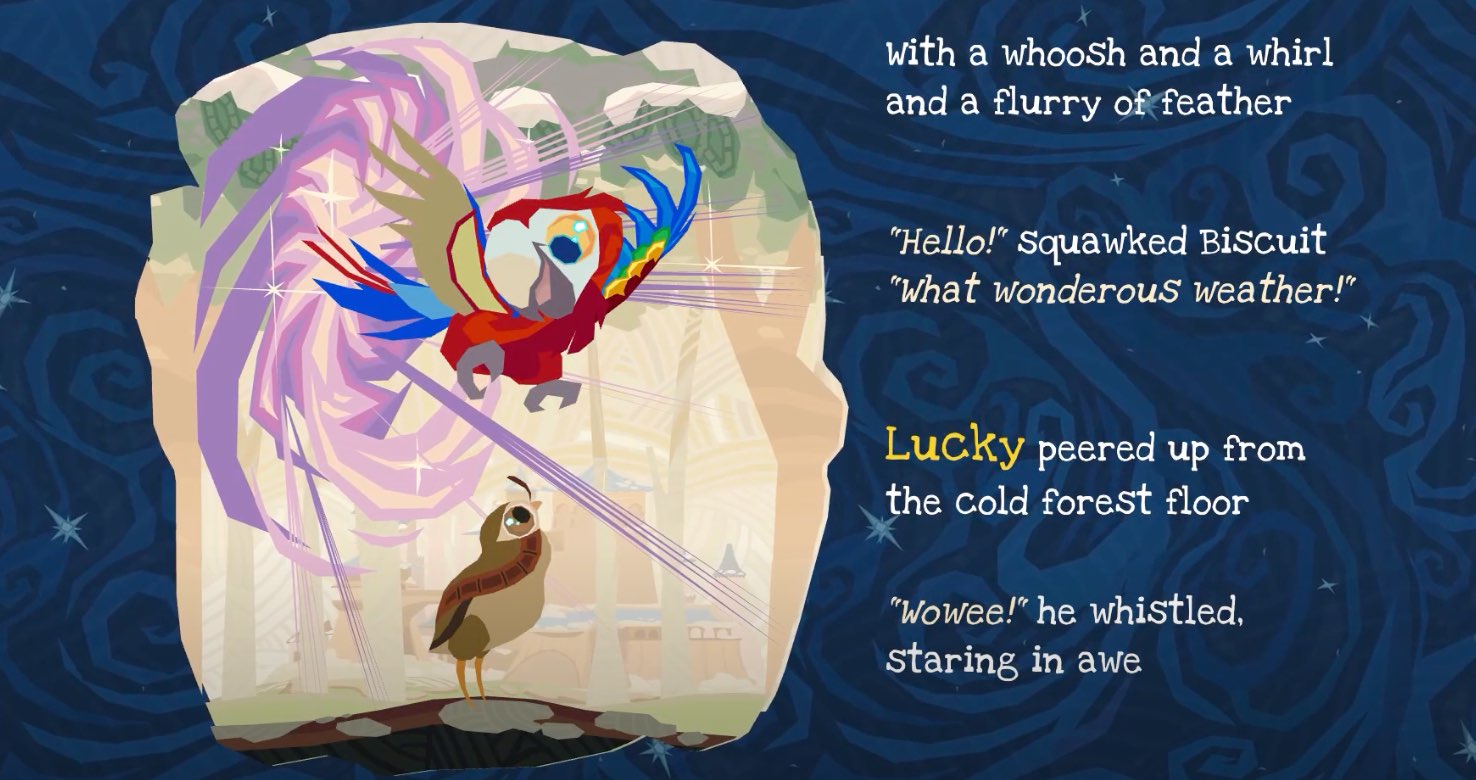 But how do translators rework the rhymes in their languages? They have different approaches to it.

1. Use a rhyming dictionary. Finding the rhyme as close to the original text as possible is the best approach. However, in translation, time is often limited and this approach does not always work. In that case, listing translations of the rhyming words in English to brainstorm can help.

2. Translate the beginning, make up the end. Other translators try to find the middle ground. They do it by keeping the first line or half of the sentence close to the original and leaving the second one behind. This helps to try and find something new in the target language. At the same time, they are keeping the principal tone. The online dictionaries that display lists of rhyming words help a lot.

“It is a bit like solving a puzzle. Finding suitable words and phrases in the target language first and then placing them is what I do. I generally translated the first half of the sentence and then rhymed the other half with the first one.” - Ayşenur Özkaya, Turkish translator says.

3. Translate text as close as possible to the original. It is possible that the source language’s rhyme also rhymes in the target language. Sometimes, the translator could rhyme the verse by changing the word order. Another approach is replacing some words with suitable synonyms. If that doesn’t work, translators may alter the translation to ensure that it rhymes. Of course, making sure it retains its original meaning. Ideally, the translation should be roughly as long as the source text. This helps to keep its original rhythm.

4. A step-by-step transcreation. Some translators use this workflow when translating similar projects:

The transcreators should also keep in mind the audience’s expectations. In some cases, the audience expects certain rules in the verses, poems, and songs. And children are no exception. They expect particular patterns, rhyme types, and meters. “You can’t go full-scale experimental or avant-garde even if you feel like it. You have to play by children’s rules so that they don’t lose interest” - Slava Pavlov, Russian translator.

As a result, a short verse:

“These fish have no idea what friendship is…

We’d better stay away from their sharp teeth!”

It looks like mere fun but this is a very serious race.#indiegame #indiedev #nintendoswitch #switch #penguin #dragon pic.twitter.com/9d0tH472Rx

Transcreation and jokes and puns

Now, the most challenging part - puns and jokes. That’s the trickiest, as puns are dependent on both language and culture. Let’s see how our translators solved this challenge in Fledging Heroes in different languages.

Some examples of transcreation of the game “Fledgeling Heroes”

EN:  Scallywags have a nutrition deficiency

The idea here is that the pirates are a danger to you, so push them in the water where they can’t hurt you. “While I could have rhymed something with “Skorbut” (scurvy), this might have been a tad too complicated for kids to understand, so the German version of the game was transformed into “The pirates want to pluck your feathers, oh how grim, so push them in the water (for a little swim).” This is basically using English mainly as a pointer and rewriting the line for German.” - Nick, German translator.

Sometimes the recreated text may be for an audience of a certain age. The game Fledgling Heroes is aimed at the kids. So the translators had an extra challenge to recreate the game. Considering it must be done in such a way that the children will enjoy and understand it. It should also feel natural to them.

So, when transcreating texts for kids, translators should be cautious and… watch their vocabulary.

For example, our Italian translator had to change the Italian word for “bird” to a different one. The original translation is also an adult euphemism in Italian.

When it comes to advanced vocabulary usage, some translators avoid specialist language, foreign terms, and age-inappropriate terms while others prefer to keep the balance between using advanced words and simplicity. When they use more advanced words, they will make sure that the meaning of the words would be understandable from the game context.

For instance, in Chinese, some words were duplicated on purpose to give it the colloquial “baby talk” touch. For example, “考慮” (think over) became “考慮考慮” (lit. think-think).

Transcreation can be challenging, but it also may be rewarding at the same time. We hope that these tips and tricks were exciting. And that you have learned something new from our translators who worked very hard on the game “Fledgling Heroes.”

Are you working on a similar project? Are you planning to localize for the international market? Feel free to contact us, and we will help you.