Why should Poland be your next country for game localization?

There are over 50 million native speakers of the Polish language around the world and it is among the top 3 most spoken Slavic languages. Polish is used by approximately 38.5 million people as their first language, and it is also spoken in the fairly large Polish communities in the Czech Republic, Slovakia, Belarus, Ukraine, Lithuania, and Latvia.

Poland has 16 million gamers and that it is among the top 25 gaming countries in the world, with a net worth of USD550 million. The average revenue per user in 2020 is USD 29.36, which is USD 2.03 higher, compared to 2018. Overall, Poland’s video game market has been consistently growing in previous years, and this trend is expected to continue in the next five years as well.

The Polish gaming market is hungry for more!

Poland has a well-developed gaming scene. According to the Game Industry of Poland Report, there are 440 development studios in Poland and 480 new releases annually.  Poland is ranked 7th when it comes to indie games income, while the e-sport market worth is USD 11.5 million.

In the upcoming years, it is expected to become the largest game development hub in Central and Eastern Europe, to a high extent, due to the success of now well-known game development studios such as CD Projekt Red (creators of Cyberpunk 2077, arguably the most anticipated video game of 2020), Techland, PlayWay, 11 Bit Studios, and Ten Square games.  Another reason is good education support in the country, as well as the creativity of developers to make a recognizable style and unique games. Moreover, Poland is the first country in the world that has introduced a video game reading into their education system - “This War of Mine” by 11 Bit Studios.

The government is also in the mood to financially support video games with European or Polish cultural themes whether they are foreign or homemade (as long as they have an open branch in Poland). Developers can apply for at least two public aid programs: Creative industry Support and GAMEINN.

According to ICTmarket’s expert analysis, 34% of Polish gamers bought PC games and 27% went for mobile (social or browser) games in 2019. If we also introduce the financial aspects into the picture, in 2020, mobile games showed the biggest potential by bringing USD 160 million.

Payment style – are add-ons the way to go?

When the absence of these payment options, or suspiciousness over paying methods and inability to see the website in Polish appear, the gamers are ready to give up on their purchase. Speaking of finances, free to play seems to be a popular business model. In other words, game monetization comes through ads displayed in a game or extra downloadable content. 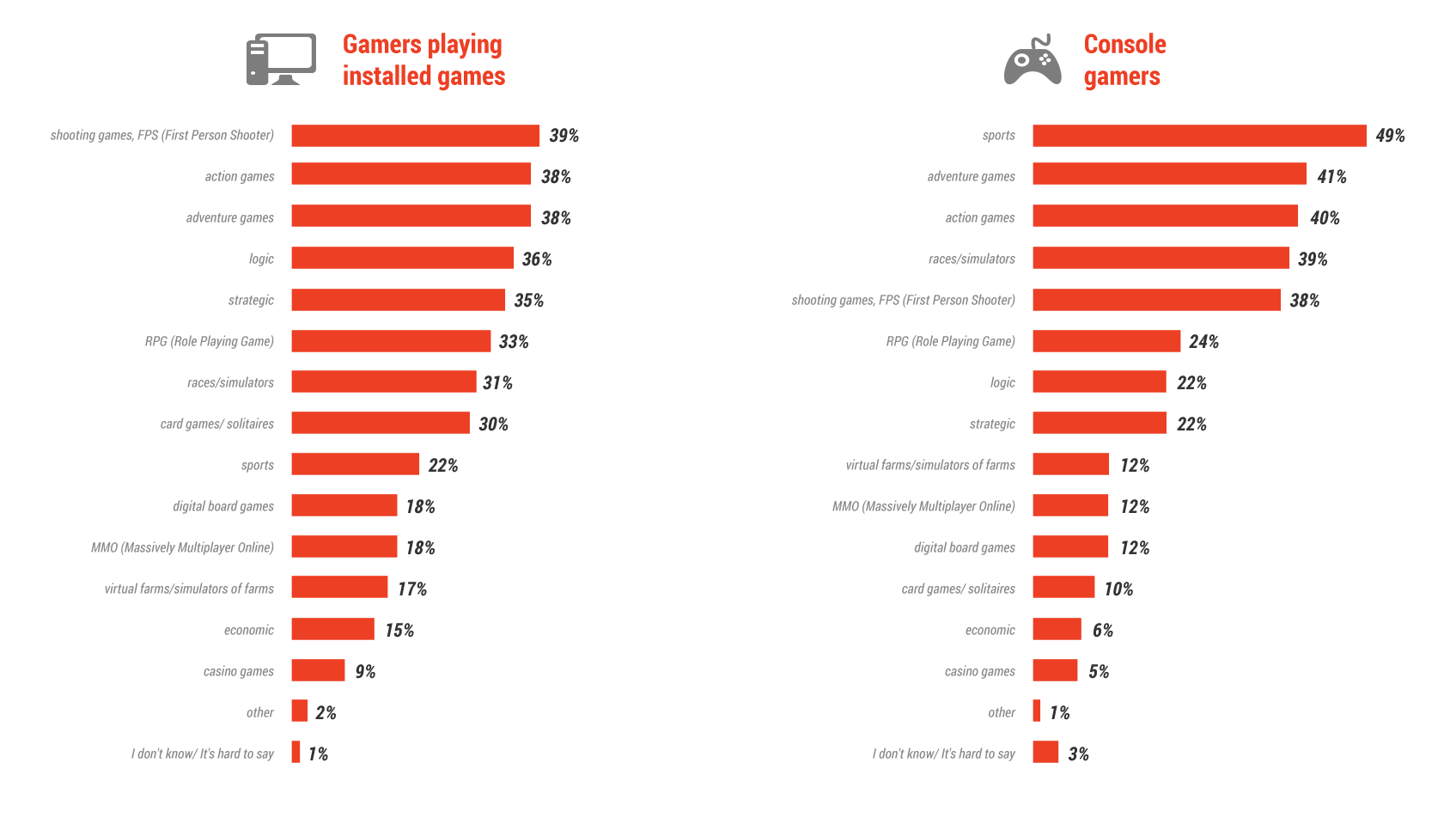 Another common thing among these two types of players is a choice of multiplayer and massively multiplayer games. The farm simulators are the prominent choice of players who use browser and social media sites, with almost one third choosing to play board games on social media (Statista). Mobile gamers are the most active users in Poland, which does make sense considering how often people interact with their phones during a day. According to a Statista survey, logic games seem to be the most popular choice of mobile and tablet users.

Another interesting Statista data uncovers psychological motivations behind game engagement. Namely, smartphone users in Poland are inclined to play games in order to increase their fun levels, whilst computer users select gaming for relaxation.  In the last couple of years, the number of active game users is increasing.  Overall, the age of players is between 15 and 55 years old, with distinct preferences regarding platforms.

Most popular games in Poland

Popular video games in Poland are FIFA, The Witcher and Grand Theft Auto. The most popular mobile app is Brawl Stars, followed by Words of Wonders, Pokemon GO and Moja Kawiarnia. Virtual reality games haven’t gained that much popularity compared to other options. There is some interest in it though, which could increase over time due to the fact that Polish companies such as CD Projekt Red are tackling this field as well. In addition, the popularity of Intel Extreme Masters in Кatowice is growing.

Polish game localization – is it necessary?

Just one third of Poles speak English to some extent. However, due to the country’s historical background these numbers are significantly lower for people who are over 40 or live outside the capital. If we add to it the unwillingness of players to pay for the game when the website is displayed in a foreign language, it is worth considering game localization.

The majority of Polish gamers care about their gaming experience and enjoy immensely good plot lines, immersion, dialogues or an option for different endings (as we have seen in The Witcher series). This stays true whether the game was originally developed in Poland, or simply translated into Polish. They are by now used to an impeccable video game quality which fulfils their gaming experience.

Polish is frequently listed somewhere in the top 10 list of the world’s most difficult languages and for good reason. Without getting into the specifics allow me to just dare you to google the phrase “Two in Polish meme” and you’ll quickly understand the vast array of things that can go wrong if proper information about a character in a dialogue isn’t supplied. Apart from that, there’s all the usual pitfalls with homonyms, nouns disguised as verbs in the source content and vice versa, punctuation, length limit problems due to text expansion and many more.

What to keep in mind when translating games to Poland?

We interviewed our Polish game localization experts Gabriela Zielińska and Piotr Domanski, and here’s what we got.

First thing one should be aware of is descriptiveness of the language, as well as the fact that Polish translations are longer. String length could become problematic in that sense. In English-Polish game localization, the strings tend to be longer than the source text. Of course, that is not always the case, but in cases where character limitations are implemented, it is usually rather difficult to respect the limit without transcreating the text and sometimes even losing parts of less important elements, if the source text is very close to the limit itself.

The second challenge is the complexity of Polish grammar. Unless you are the master of seven declension cases (different noun endings) and have a vast amount of time to pair it up with adjectives and gender, you should consider hiring a professional translator. A similar issue can be observed in the case of numbers: 2-4 require different noun endings than 4-0 (e.g. 2-4 pistoletY, but 5-0 pistoletÓW).

Another example is use of gender-neutral versions by replacing gender-specific pronouns by they, their etc. since it doesn’t work that way in Polish language, and in many cases, it is impossible to use the gender-neutral form without making the text sound awkward or unnatural.

The Polish language is a hard language pic.twitter.com/kUErMDv5Ag

When translating software, tags can become a quite tricky business. Namely, in English it is pretty common and straightforward to use tags, both, for numbers and for names (character names, item names etc.). However, this is not so simple to do in case of highly inflected languages, such as Polish, where the form of the word needs to be changed depending on how/where it is used, as well as many of the surrounding words need to change form depending on the number used. Since tags must stay the same, it is important to understand what the tags are altering so we can place them properly in the text translation.

The word order in Polish sentences is typically much more different than in English. It is especially important when the sentences contain tags or placeholders - it has to be possible to move them around in order for the sentence to make sense in target language.

Polish audience might be a bit more sensitive than other European target groups when it comes to religion, LGBT topics, post-WWII history. However, it will depend more on the game’s target group, the genre and the general construct of the game.

As a general rule of thumb foreign elements are left out in translations and it is desirable to translate the location/character names and always to transcreate the puns and to keep the game funny and entertaining (e.g. in games for children).

However, it must be emphasized that some English words have managed to find their way into Polish language and function well without any translation. For example, ‘patch’, which used to be translated as ‘łatka’, and is nowadays left in English during the game translation process.

Another case when it is better to keep the proper names in English is for example, if the game story takes place in the “real world”.

What is a plus in game translating?

Cultural adjustment or in other words, the strategy of changing cultural elements so they could fit better to Polish culture. This makes games more appealing to Polish gamers. The major reason for it is because gamers can then feel a stronger pull, perceiving like those games have been developed only for them.

Mistakes that you can avoid in your game translation into Polish

One of the biggest mistakes is imposing character constraints which make the translators think up unnatural translations or use abbreviations so as not to exceed the length limit.

The next mistake is not providing translators with enough contextual info and then not performing linguistics tests once the texts get implemented in the game.

Sometimes, the game content creators assume that the Polish language has exactly the same sentence syntax as the English language. In order to avoid problems with localization, it is best to allow syntax changes in the translation phase, and that includes elements like the correct placement of the placeholders in Polish sentences.

Ultimate advice for you

The most general and important advice for the client would be to trust the linguist. Especially in game translations these are more often than not experienced players, often very active members of the player community. It is not that they know it all, but consulting them and taking their opinion seriously might be critical to the game’s success in a specific market.