Game Localization For Indonesia - Will You Miss The 4th Largest Country In The World?

For game developers, Indonesia is one of the most promising markets with the population accounting for 3.5% of global numbers, right after China, India, and the US. If you’re considering promoting your game in Asia, you can’t skip Indonesia. And here’s why.

Indonesia is a booming games market

Indonesia represents 40% of the overall games market in Greater South East Asia (GSEA). There are 111 million active players with the ARPU of over $16. The game market is dominated by foreign publishers. 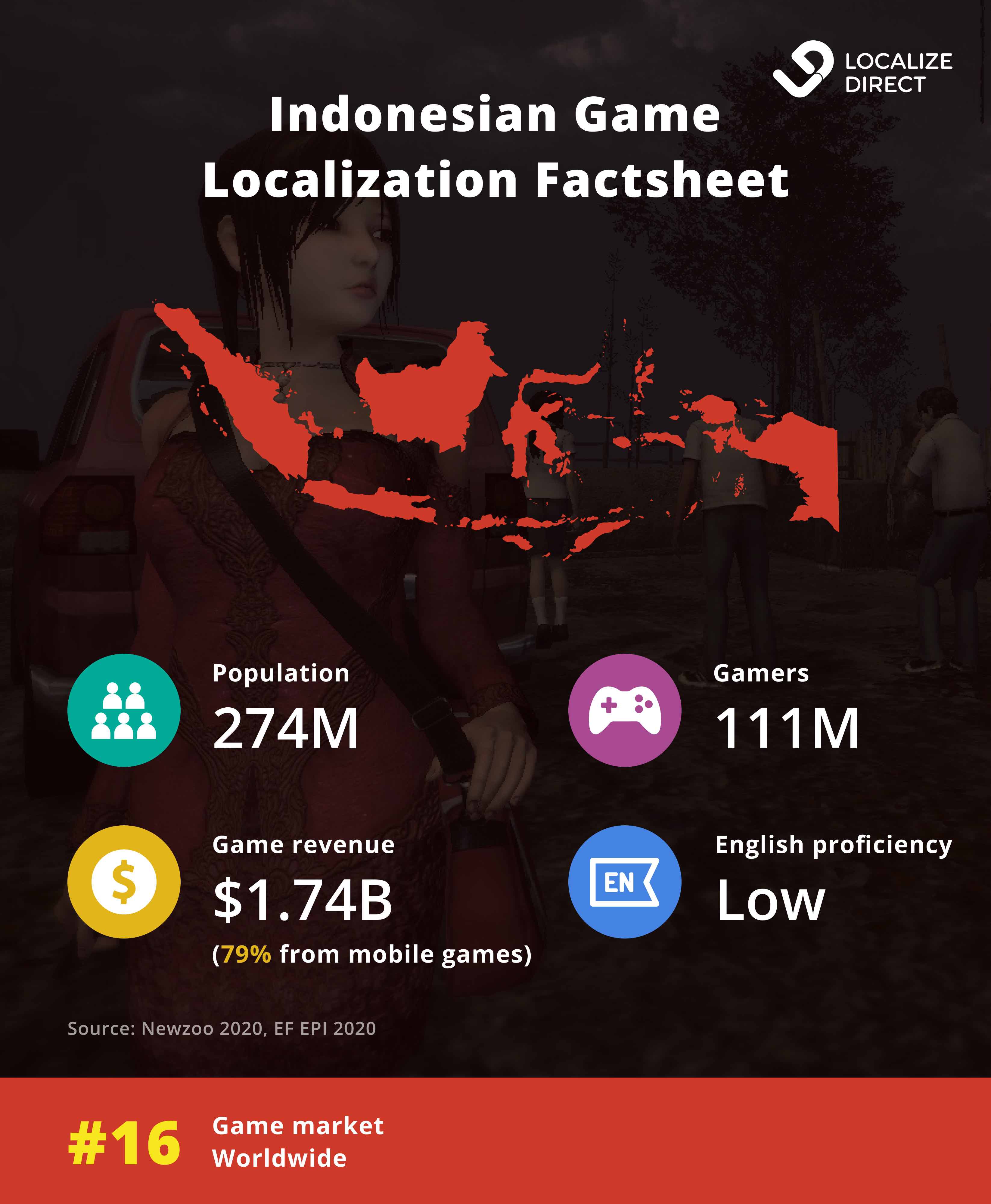 In 2020, PC and mobile games brought $765 million in revenue and both segments are showing significant growth. Overall, there has been a consistent market expansion in the last two years, especially mobile games which grew by 40%. 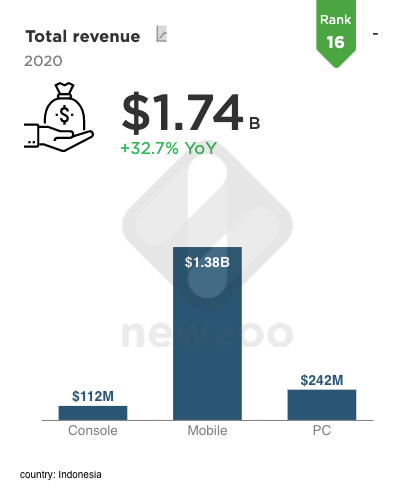 Indonesia is expected to be in the top 20 games revenue countries this year with $1,9 billion, continuing its rise up to $2,7 billion in the next five years.

Only 65% of Indonesians currently have access to the Internet, which means there is big potential for expansion.

Favorite game platforms in Indonesia: mobile is a winning bet

85% of Indonesians who have access to the internet, use their smartphones to play video games. This makes Indonesia one of the biggest markets for mobile revenue with 120,7 million mobile players, which ranks it among the “Big Six” mobile gaming countries in Southeast Asia.

Mobile games generate twice as much revenue as PC games. There are two possible explanations for this gap:

Statista predicts a continuous growth of mobile users in the upcoming five years, adding up to 16 million new players by 2025.

As with many emerging markets, the Android operating system notably leads in terms of installments and downloads, but the iOS App Store has better monetization.

Coronavirus has increased spending and consumption of video games, especially mobile ones. 41%t of smartphone users extended their mobile gaming time. AppsFlyer marked an increase of 11% in in-app purchases for mobile gaming. Interest in esports has risen too, as people were obliged to follow healthcare measures and stay home.

Interesting fact: To pay for games, Indonesian mobile gamers prefer credit cards and iMoney. On the other hand, PC players pay via credit card and online banking from home, or they chose cash if they went to Internet cafes.

NB: Since August 2020, there is a 10% VAT for e-commerce and digital services. This has affected game prices as well.

In 2019, action was the most popular mobile game genre, which brought 20% of downloads and 43% in revenue. It was followed by arcade and simulation. 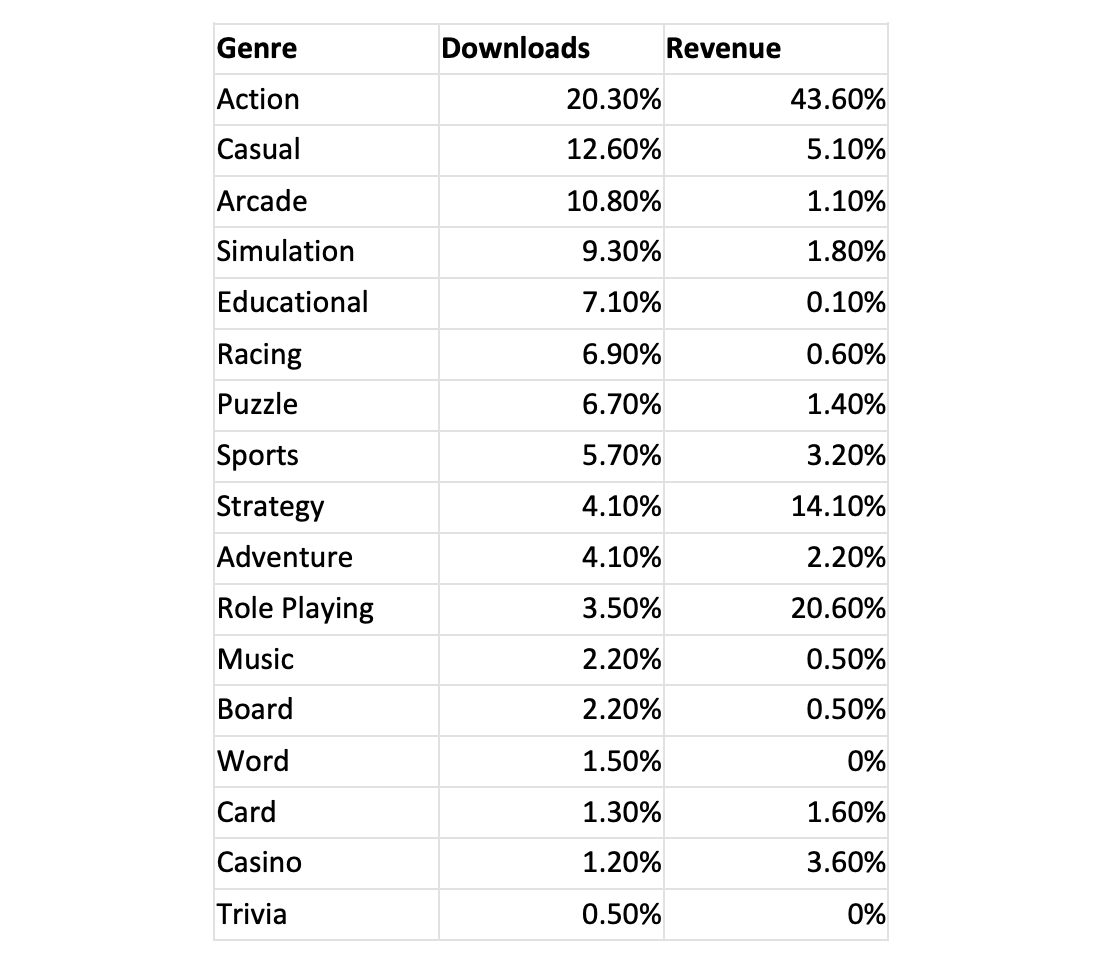 Top genre for consoles is MMO (Battle Royale), and MOBA and strategy for PC. The most profitable and downloaded games (Garena Free Fire, Mobile Legends: Bang Bang, PUBG Mobile) belong to action and MOBA. Trivia, Casino and Card genre games seem to be the least interesting for Indonesian gamers.

What about Indonesian eSport games?

The Indonesian government supports the games market and foreign game investors. For instance, eSports is an official sport with esports championships hosted by state institutions.

Almost half of users play games every day, and about one-fifth plays from 4 to 6 times per week, spending between 30 and 60 minutes per game.

Line app is also widely popular for chatting and playing more simple games. Prior to Covid-19, internet cafes were an important part of the gaming culture where players prefered to gather and enjoy in competitive sports. There is even an Internet Cafes Business Association which works side by side with publishers and other game associations.

Game localization into Indonesian: the Dos and Don’ts

Indonesian language (Bahasa Indonesia) is spoken by 35 million native speakers, and about 150 million use it as their second language. Indonesian speakers can also be found in the Netherlands, Philippines, Saudi Arabia, Singapore and the United States.

Even though players in the larger cities are accustomed to playing in English, overall English proficiency is low: #74 globally in the EF English Proficiency Index. Therefore, Indonesian is the most common language choice.

How to succeed in translating your English game for Indonesian audience?

1 - Pay attention to the length of strings

Generally, Indonesian translations are 20% longer than the English source. If there’s a character limitation, skilful translators usually keep the terms in English, or delete some words as long as the meaning remains intact. Character restrictions happen frequently because strings usually can’t be longer than source. This creates struggles in choosing the correct words for translations. As such, often enough, the translation needs to be transcreated, not just translated.

Indonesian language has some linguistic markers that English does not have. Language deviations are common so the translators need to be aware of the context. For example, there are many variations to a word ‘sister’ in Indonesian, which can be confusing. An official term is “saudara perempuan”, but often it is not used because it is too long.  Translators should know whether it is a younger or older sister.

In Indonesia, comma is used for decimal points and periods - to separate thousands. Local date formatting is DD-MM-YYYY. Time should use 24-hour format (HH.MM).

4 - You can leave names and skills as they are

Gamers prefer original names for game characters and skills because they often compete with other players globally.

It is excellent if the translators are also players, hence they have a passion for games. In that way it will be easier to figure out what word works and what doesn’t. A good sense of communication is needed so that translation doesnt end up being just “word per word”.

1 - Do not treat translation as just “translation”

One of the most common mistakes is translating in-game dialogues out of context without paying attention to who’s speaking to whom (hence it would be misleading and confusing to gamers when reading it in game) or translating too literally when encountering English idioms. A successful game localization is knowing when to translate and when not to translate (if the English term is more familiar to gamers), e.g. PUBG Mobile (they keep skill names, item names, and common game terms in EN).

Sometimes lack of information and response from game publishers in the query sheet, and an unreasonable deadline may also cause suboptimal localization.

Avoid sensitive topics such as religion and sexual orientation. In the traditional province Aceh, the local council has characterized PUBG games as sinful, stating that these games are insulting their religion, and could provoke violent behaviour among the younger population. Although there isn’t an official law in Indonesia that forbids playing PUBG games, it is good to keep in mind the cultural values. The majority of the population in Indonesia are Sunni muslims.

Last but not least, Indonesian players appreciate good graphics and lag-free games. They often rely on word of mouth recommendations before testing a new game. Localized games have more chances to be praised.

Are you ready to conquer Indonesia? Contact us to get a tailor-made recommendation about this promising market for your game.