Game Localization Matters: 7 Reasons Why You Should Localize

All games are developed from a cultural context. Localization is about customizing that context to another, specific market. For a game or app, to attain a global reach, localization is an effective way to widen the market and reach more gamers.

What is video game localization?

A large number of gamers will not download a game unless it is in their native language. Game localization builds credibility worldwide: higher rankings, more downloads, and increased sales are the pros.

I give you 7 reasons why you should localize your game.

1. You want to increase your sales

Sure, you were once an altruistic programmer dreaming about changing the world with a useful application that would change people’s lives and turn the entire industry upside down. Now you have a game and you are about to launch it. Congrats! It might not change people’s lives the way you intended. But it is fun. Maybe this game actually will change lives, your life for instance, because now you want to sell your game.

You calculate, thinking a dollar per download sounds fair.

At this moment there are 7,702,294,353 people living on Earth. Not everyone plays games of course. Let’s remove the oldest and the youngest and the non-gamers, then maybe we have 3,000,000,000 people left. Let’s remove half of that (we don’t want to exaggerate). If they all download your game - you will become very rich.

But they won’t. An English game will reach only 27 % of the market, and you want to conquer the entire world. This is when the calculation begins! 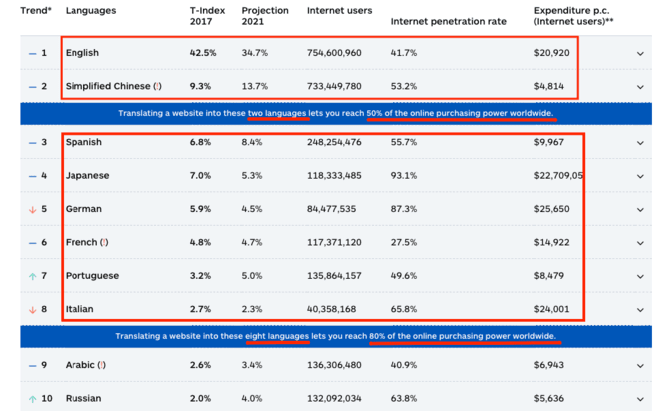 Languages with the greatest potential for online sales. Source: T-Index 2018

*We cannot guarantee to will become a super-duper rich billionaire but we know you will have a greater number of happy users and reviews if the localization is right.

2. You want to increase downloads

Is it worth it? Yes. The return of investment (ROI) is impressive. Almost 100% of top 100 downloads in App Store China are in Chinese. Japan and Korea – and those are huge game markets – also have high levels of translated games. What these Asian countries have in common is their strong preference for native languages combined with low proficiency in English.

But there are big European game countries like France, Germany, and Italy where the English proficiency is high but they still prefer games in their native language. And let’s not forget Brazil, Argentina, and Mexico with their large game population. All these markets show why localization is important. Localization is about catching the local context in every region.

The effect of having a multilingual app is a visible one as downloads and revenue will increase. A publication made by Distimo shows that app downloads increased with 128 % during the following week compared to the week before without translation. In China, Japan and South Korea the difference was higher. Did I mention that revenue increased by 26 % during the same period?

Can you afford to lose these markets?

3. You want your gamers to feel important

Localization is an easy way to please your users. Walk that extra mile and you will have followers that endorse you as their version feels like it was made for them specifically. Today, game developers want gamers to empathize and immerse themselves in the story.

In the beginning, gamers followed a certain path in the game: go up, hit the cube, retrieve the flower, continue, jump, dive, swim to the next level. Today, developers allow the players to choose game direction for themselves, or to choose the right character with a personality that will motivate them best; especially when it comes to participating in a dialogue with the game and the characters in it.

With the user experience at the forefront, a perfectly tailored localization immerses gamers and allows the them to play their own story. The more languages covered, the more happy users will play your game in their own cultural and linguistic context.

Localization is of great importance as it will stop confusion on storyline. A personal relationship is being built between the developer and user.

4. You want to stay competitive in a tough market

There are two viewpoints to localization. The first one has a strategic, proactive approach. You want to reach the global market and you chose which countries, and what languages you want to go for. The second approach is reactive. You have received hints that gamers across the globe want to play the game in their language. The outcome of both aspects is that the game becomes more competitive in an international market. But if the translations cover the wrong markets or the game is being translated too late, someone else might take that market share instead. There are others ready to take your place. And you need to find a way to stand out among the other 2.2+ million apps in App Store.

When developing a game, localization should always be a part of that process. Then it will be possible to sim-ship a multilingual launch to several countries at the same time.

5. Keep control of your game

Localization is a way for you to avoid “other” translation - or ROM-hacking. Developers have differing views about this area. However, if you as a developer translate and localize, then it is easier for you to keep control of the translation quality. You might save time and money with a professional translator and avoid mistakes like the ones mentioned below.

If you are planning to localize; instead of squeezing it in somewhere at the end of the project - use a professional localization vendor and make localization a part of the project. Then you will have the peace of mind knowing that loc needn’t be the back-end pain it regularly is. This will save you both money and time, but also give you control of your initial distribution. Simultaneous release in different languages can provide your launch with positive feedback. The opposite – negative feedback (because of a lack of languages) will give the game a rough start, which is hard to turn around.

Localization as a part of the process will save you time and money rather than changing the text and translating it just when the game is done.

6. Save you from public embarrassment


Thinking big is thinking small. If you want to go global, then you need to localize. If you understand your users, they will understand you. You will know. Your payback will be increased sales, happy users, and good reviews.

High quality translation and localization by experts will protect your brand and boost your marketing. We regularly receive text to proofread, and it’s lucky these somewhat strange mistranslations weren’t in the launch versions:

To be translated: Let's make a toast
Portuguese translation: "Vamos fazer uma torrada" (toast as in bread) and not as it was supposed to be "Vamos fazer um brinde" (with toast as in -Cheers- with drinks) - which underlines the importance of having additional help text handed to the translators.

Do you want more reading on funny translation mistakes found by the game localization testers? Check this out.

7. Get higher ranking in App Store

Users have the power to influence your ranking. Lack of translation might lead to negative reviews just to show disappointment. And to rise from that feedback takes a lot of time and effort.

But if the app is translated by professional translators, users shouldn’t experience those jarring incorrect translations and start giving positive feedback. And this feedback from different key countries will get App Store to pay attention to your product. Your app will have a higher potential of showing up in App Store searches.

Studies have shown that people will pay to download if the app is translated specifically into their language. There is where you have your money. Localization might not be that expensive then.

Check these 10 tips to take your game global by Google’s Android Developers: