Ever thought about expanding your game to the MENA region but not sure where to start? Try Turkey first. It’s very much a mix of East and West, it is also the most developed games market and the video game centre of MENA. Previously Turkey attracted mostly Asian publishers, now, Western companies include it in their expansion plans too. 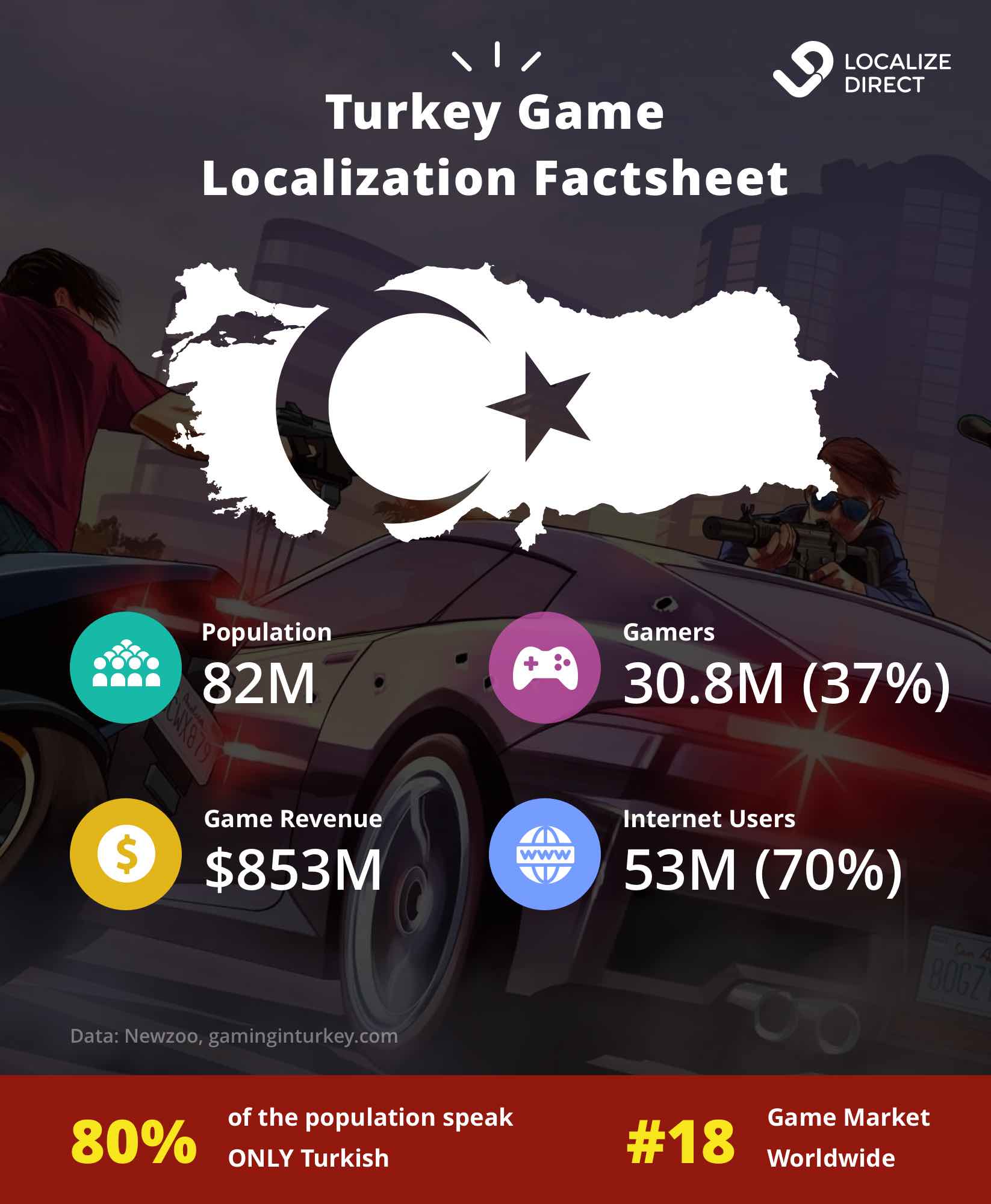 Turkey is a 30 million strong gamers market, full of young gamers (this is more than the total population of many European countries!)

Last year, Turkish gamers generated over $850 million in game revenue. This translated into the ranking they occupied in the top 20 most lucrative games markers globally. In 2019, Turkish online games revenues are predicted to grow at 8%, and mobile games are expected to bring 9% more revenue than in 2018.

Fun fact: Turkish gamers spend 70% of their time on PC, ranking 3rd after only Poland and Russia. In 2018, PC/Console games generated more revenue than mobile games.

Internet cafes. There are more than 20,000 cyber cafes in Turkey which are visited by 7.5 million gamers every month. This means that even those players who do not have cutting-edge technology at home, can still play complex video games elsewhere.

Over the last year, computer games became more affordable due to the numerous promotions on digital gaming platforms like Steam. No wonder Turkey has been called “the video game centre of the MENA region”.

Some game brands that target Turkey

Thanks to mobile gaming, the gamer user base grew considerably in just a few years. There are 50 million smartphone users in the country, and after the arrival of the popular “Angry Birds,” “Candy Crush” and “Fruit Ninja” games, more and more people started playing mobile games.

In 2018, the popularity of video games, PlayerUnknown’s Battlegrounds and Fortnite, boosted the interest in both mobile and online games. Nintendo re-entered Turkey with the Nintendo Switch in 2018 after an absence of many years. Epic Games, Riot Games, Zynga, Netmarble and a number of other game brands have Turkey in their portfolios.

What are the most popular game genres in Turkey?

According to Gaming in Turkey , Turkish gamers prefer MOBA, strategy, RPG, casual, and esports game genres. Many were attracted by the “Grand Theft Auto” series and easily turned into fans afterwards.

If you developed a mobile board game, definitely localize it into Turkish - almost half of all mobile sessions are related to this game genre. 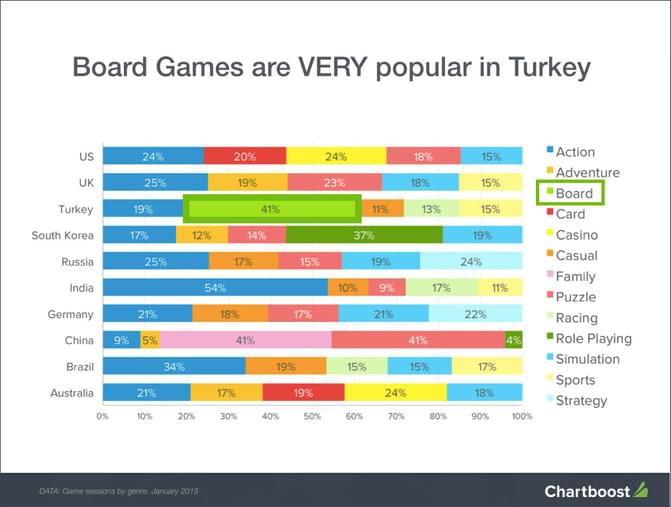 Turkish gamers prefer free-to-play games, based on the “micro-transaction” model, when gamers play for free but pay to upgrade their accounts.

Competition is an important part of gaming habits too: Turkish gamers love features like “player versus player”. Also, the content and game rules should be accessible and easy to learn.

Successful games in Turkey are all localized

80% of the Turkish population don’t speak any other language but Turkish. This means - game localization is a must if you want to win over your target gaming audience.

Localizing your game into the Turkish market is easier than into any of the Arabic-speaking countries. Unlike right-to-left Arabic, Turkey in written from left to right which makes it easier from the perspective of UI/UX design.

However, there are some Turkish-specific characters. For instance, there are 4 i’s in the Turkish language: dotted and dotless. While the uppercase for ‘i’ in English is I, in Turkish it’s dotted İ. Some Latin characters aren’t used at all.

Follow the recommendations of our Turkish translators on what to pay attention to in your translation process to ensure top-notch localization, whether it’s a mobile, PC or console game.

Fun fact: Imperative buttons and commands are usually one word longer than the original English source. Why?

Cagdas Mandali: “In Turkish, there are many verbs that are made of one noun and one auxiliary verb. Such as, “Accept” is a noun in Turkish when translated alone (Kabul). You make it a verb by adding an auxiliary verb, and it has to become “Kabul Et”. This applies to many other buttons, such as deposit, withdraw, help, continue… The list is long.”

#2 - Take suffixes seriously in the placeholders

Turkish is the language of suffixes. And if in the regular translations the linguists can customize it accordingly, when it comes to the text with placeholders, it’s a real challenge for translators.

Cagdas Mandali: “Say, our text is “Send Energy to {player_name}“. It is clear that the placeholder will be replaced by another player’s name. But, in Turkish, any name will have a different suffix.

*Since there is no legit way of finding a one size fits all translation, we localize it as “Send Energy to the player whose name is {player_name}” or “X that belongs to the player named {player_name}“. Unfortunately, the only solution is to define different placeholder suffixes and also placeholders for last syllables of all nouns, which is almost impossible as long as clients send us only unified placeholder texts.”*

#3 - Link your game to the local culture

References to the local celebrities and jokes will be appreciated although don’t overdo culturalization. If gamers are playing a game featuring Italian mafia, no need to turn it into Turkish gangsters.

BUT: If the original text refers to the American animated sitcom Family Guy, we should make a reference to the popular Turkish Version of Survivor, where the joke will be similarly popular among our target group.

Collaboration with local celebrities can be also useful. When localizing its F2P title “League of Legends”, Riot Games hired Turkish celebrities as voice actors. It paid off: the game became super popular and attracted thousands Turkish gamers to the Internet cafes to play LoL.

#4 - Adjust formatting to the Turkish locale

If your original game was developed in the US or for the US audience, change dates, time, decimal separators, currency. Remember The Witcher 3 by CD Projekt that took the hit by localizing the price?

c) Numeric format: 999.999,99 with comma as decimal separator and period as a grouping character. Currency symbol positioned after number.

Ali Yucel: “We put the percentage sign before the number rather than after it. We don’t use single quotation marks unless it’s a quote within a quote. And our rules for using commas are quite different from that of English.”

In some cases, the street version of the language would be preferred over the academic one. Plus, many international words became an indispensable part of Turkish daily vocabulary. So to say, there is no need to translate sushi as the “Japanese raw fish dish” - sushi is sushi, full stop. 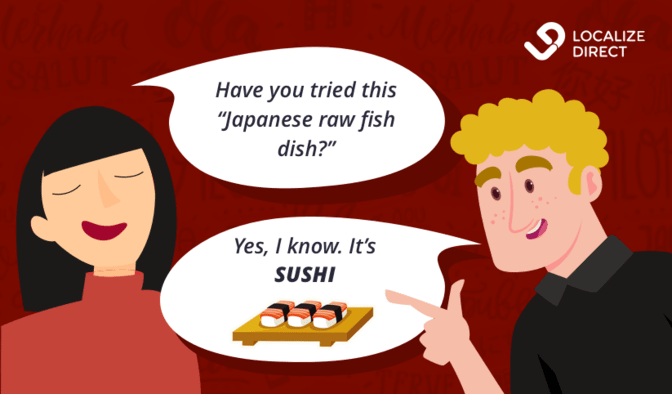 Cagdas Mandali: “One game that I localized features kids - uneducated, rude, swearing all the time. I translated their dialogues in the same manner as Turkish street kids would talk, without attention to grammar, misspelling some words. However, the developers decided to go with the “proofed and corrected” version of the text where those kids were talking like ladies and barons.

Luckily, after the texts went online, the developers consulted a 3rd party, and decided to change the already live texts for the “street version.”

Religion (Islam) can become a sensitive issue, but there’s always a work-around. Casino games are banned in Turkey although no other games with microtransactions or in-game purchases are at risk.

As in many other countries, ultra violent games or those that “undermine” Islam find themselves on shaky ground, especially if they target a young audience.

For instance: since 2015, Minecraft has been banned in Turkey because the Family and Social Policies Ministry believed it was “encouraging children to resort to violence”. Or, a few years ago, the union of imams of Turkey called for a ban of Pokemon Go for “insulting Islam” as the players tried to catch pokemons in mosques.

Turks have trouble finding tutorials or walkthroughs in Turkish. If they don’t understand sophisticated games such as World of Warcraft, they quit. League of Legends gained a lot of popularity after it was localized into Turkish and it still has a HUGE community in Turkey (over 13 million active accounts).

Ali Yucel: “To give an example, even at the height of WoW, all non-English speaking Turkish gamers preferred Knight Online over it, because it was very simple, and it didn’t require much knowledge of English. It was simply a hack and slash MMO. Yet, there were thousands of Turkish websites, forums and blogs dedicated to Knight Online.”

Allow Turkish translators and native-speaking testers to PLAY the game to spot any inconsistencies and errors. Usually, professional game translation services have proofreading as part of their localization process, without LQA, they track grammar mistakes rather than language-related issues.

Ali Yucel: “Many publishers/developers will pay for the QA of the translations, but not for actually playing the game and making note of the issues there. Professional publishers pay for at least 5 hours of play time, with developer access, and that solves a lot of problems. Sometimes, even the same sentences/expressions will need to be translated differently depending on the context. You cannot always catch that by simply looking at the Excel or MemoQ screen. At least that’s the case in Turkish.”

Ali Yucel: “I keep seeing Instagram and Facebook ads that were translated very badly. That’s a huge turn off. Even a single line can make a bad impression. It has to sound right, and that’s impossible with literal translation.”

How to market your game in Turkey?

Now, after you’ve localized your in- and out-game text, how are you going to promote it? As games are entertainment products, they should be marketed like movies or concerts.

You’ll need a media plan and, probably, cooperation with a local marketing agency. Influencer marketing, Google and Facebook ads are key if you want to get installs and reach a younger audience.

Traditional media can be of use too. For instance, to promote its game Paramanya/Travelling Millionaire - a fully localized version of Modoo Marble, South Korean mobile game company Netmarble shared a fake news story about a mysterious man spreading money all around Istanbul, and involved fake anchors to report on it.

The campaign went viral and even made its way to a popular TV show when the truth was revealed. As a result, Paramanya became the top grossing game in Turkey (and later in Saudi Arabia).

So, what are you waiting for?

Make Turkish gamers discover your game now and book your spot at the top of the MENA region. Contact us to discuss Turkish localization services, your title potential or play with the game translation tool to get the quote estimates for MENA localization.

Why You Should Localize Your Game For India ASAP [localization factsheet]

India is a true mobile-first market. It has the second-largest smartphone user base in the world and is home to 10% of the global gaming audience. In this blog post, we'll dig deeper into what you should know about the Indian gaming market, and how you can succeed in India, from language specifications to cultural context.