There are 260 million Russian speaking people, which makes it the 6th largest language worldwide. A Russian translation of your game should be part of your market plan. Learn how to localize your game into Russian, what are the most common localization mistakes, and how to save your title from potentially bad reviews. Validated by our Russian linguists!

Why localize your game into Russian?

Russian is one of the top 10 languages for video game translation.

The Russian games market is predicted to grow by 5,2% annually. In 2018, the game industry generated $1,7 billion, making Russia the 11th largest market globally. Russian gamer numbers have increased over the last few years. One reason is a greater number of available platforms, but more importantly is the greater availability of internet access, leading to more smartphone users.

Think of Russia as a mixture of Europe and Asia. To succeed in the Russian market you need to localize because localized games earn three times more than English ones. 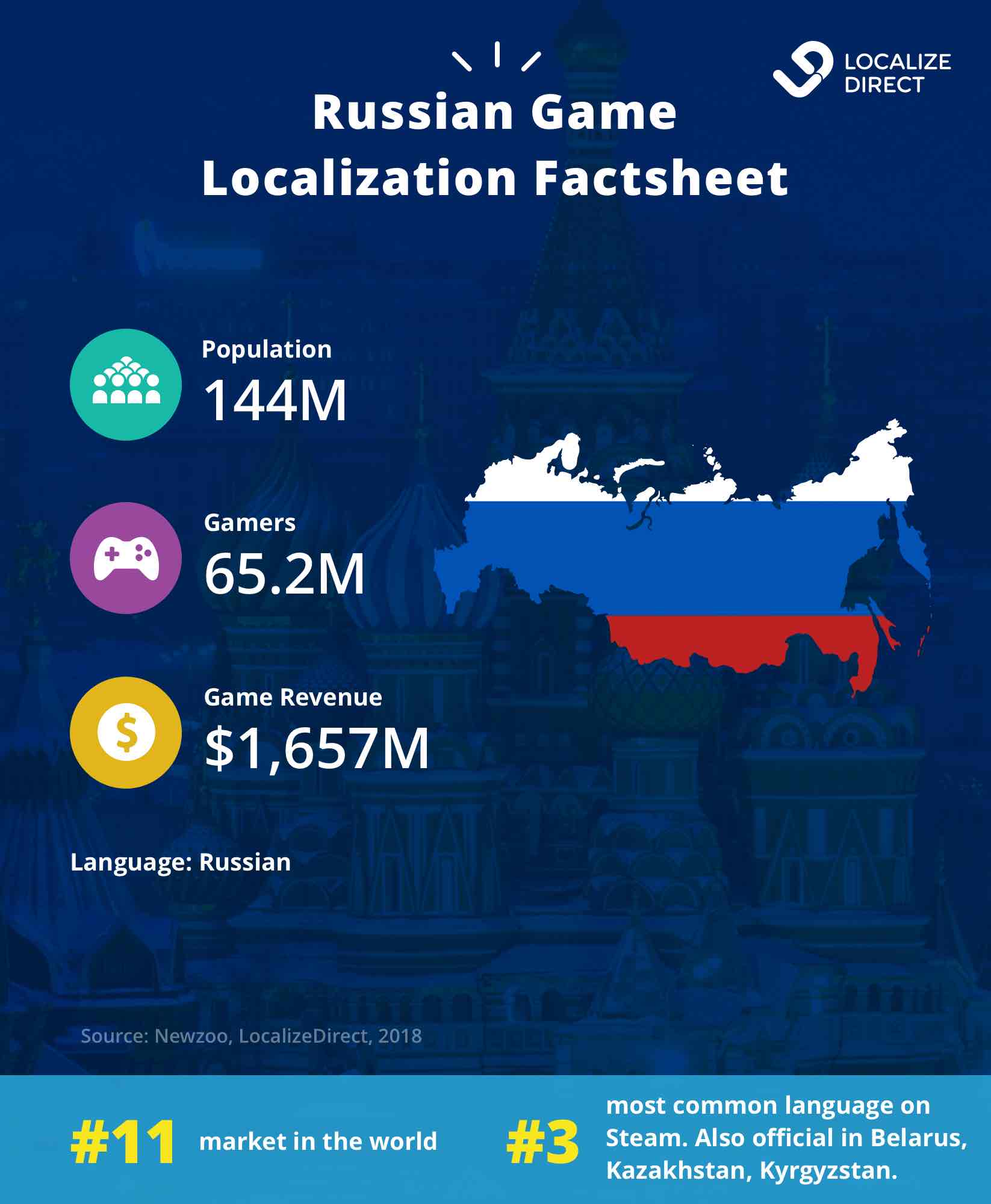 The most popular game genres in Russia

Russian is the third largest language on Steam and continues to grow. A Steam game should definitely be translated into Russian.

Online PC games are more popular than console games. Within the PC segment, MMO games, (especially short battle sessions), dominate. They account for approximately ⅓ of the market. Top MMO games in Russia are World of Tanks, Warface and Perfect world, just to name a few. 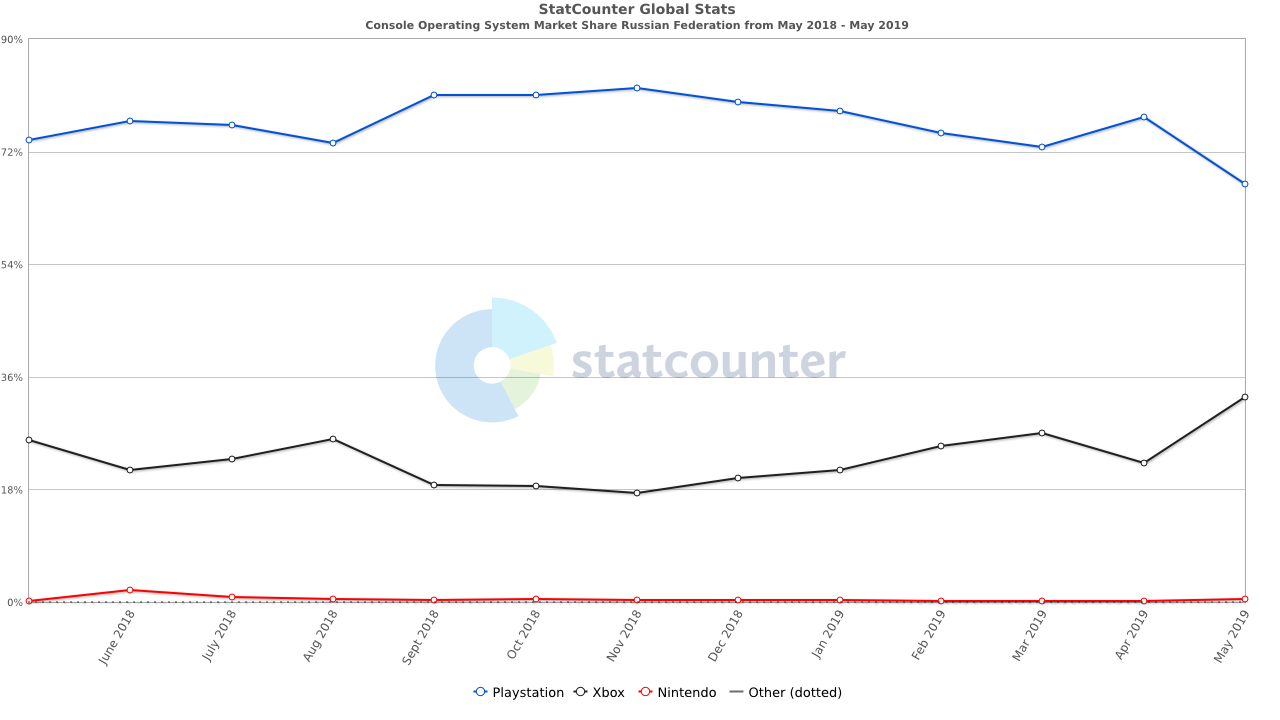 Smartphone penetration is at almost 65% and set to grow in the next few years. Android is the most popular operating system with nearly 75% of the market. iOS accounts for around 24%. Looking at both downloads and revenue, Google Play is growing faster than App Store.

Same as in China, Russia has its local alternative to the Western app stores - Yandex.Store.

Gaming apps were some of the largest drivers of app market growth, bringing in more than 1.6 billion downloads in 2016 alone, making Russia top-ranked for the number of game downloads in Europe.

In Russia, the most downloadable mobile game genres were hyper-casual, action (arcade, shooter, racing), and puzzles.

The necessity of localization in Russia

Russian in one of the most complex languages in the world to translate into. Translators need to be very skilled with excellent knowledge of Russian culture and history, but also up to date with the current language in use, as many words in modern businesses are English loanwords.

Language translation services aren’t enough; professional game translators are a must, as they are skilled to capture the dialogue, slang, humor, and most importantly create the culture that fits the regional game market.

How do you localize your game into Russian?

It is not possible to translate from English to Russian word by word: what’s being localized to Russian is the meaning.

An example: In God of War, one of the plot points is built around the father-son conflict between the Kratos and Atreus. In the original game, Kratos addresses Atreus as a “boy” and only in the final scene admits him as a “son”. It even sparked a number of memes. However, in the Russian version, “boy” has been interpreted as “son” from the very beginning (together with a few alternative synonyms) thus ruining the whole dramatic story tone experienced in the game.

To avoid this, provide reference materials, so the entire context can be understood. For gaming companies, that’s a challenge.

Actually challenge is a good example of why it is sometimes difficult to translate into Russian. Russia doesn’t have a history of competition between individuals like America, so the word challenge has different words in Russian depending on the circumstances.

The same goes with fun. Americans have fun all the time: on a boat, at the club, or fun playing a video game. How fun is being translated in Russian depends on the situation, there isn’t a general “fun” translation.

The nouns, verbs and characters

In Russian, the nouns and adjectives relating to it are gender and time sensitive. This means the endings change depending on the person, time and situation.

To start, there are 6 noun declensions. Feel confused? That’s not the end.

The noun also has three different genders. The gender of a noun will affect the ending of an adjective or a verb it is used with. And the verb changes its ending depending on when it happened or when it will happen, and to whom this certain thing will happen. A pretty neutral word like “Dear” is impossible to translate into Russian since the Russian translator needs to consider the gender.

Important: Because of the case endings that depend on the position of the word in the phrase and its relation with other words, all in-game text must be present in full, including numbers and placeholders.

The modern Russian alphabet uses 33 letters from the Cyrillic script. And two of the letters do not have a sound. They just decide the sound of the letters before.

The number of characters and words will normally expand compared with English source. That is an important thing to consider. Provide the translator with character limits where needed.

We asked our Russian translators about the best practices in their game localization process, and we’d like to share that with you.

The translation into Russian is usually 20-30% longer than English source: keep that in mind when designing the UI (especially on mobile). The script length can also affect the voice-overs when the translators have to use abbreviations or change the meaning of the phrases to stay within the allotted time.

Example: In Detroit: Become Human, “Welcome to Jericho” was translated as “Иерихон здесь” (“Jericho is here”) because the literal translation “Добро пожаловать в Иерихон” would’ve been too long. The prices were rounded down (from $63.99 to $63) to match the timecodes.

Talk to the localization manager if you aren’t sure whether you’d like to translate names into Russian or leave them as they are, the solution varies on a case-to-case basis, and the translators have different opinions.

For names specifically, it is usually OK to transliterate them instead of translating/adapting, but if the game universe allows “local flavor”, fully changing the names to something local is usually the way to go, especially in kids games.

If you rely on variables a lot (things like “You won {x} stars,” “You got {xx} points,” “{1} go {0} swords with the help of {2}”) you’ll need to provide reference material so translators know what replaces those variables.

Slava: It’s a challenge to integrate text variables (player name, pet name etc.) into the target text. The problem is, Russian has six cases that are all commonly used, and if these variables are always in the nominative case, we have to re-construct the sentence for it to be grammatically correct.

Dmitry: If variables substitute a numeral, Russian needs a separate string for 1, then another one for 2-4 and another one for 5+. For example: “1 apple” from English is translated into Russian as “1 яблоко”; “2-4 apples” turn into “2-4 яблока” and “5 apples” translate into “5 яблок”. See how different endings are? Now imagine it in more complex sentences and you’ll understand how easy it is to mess up. 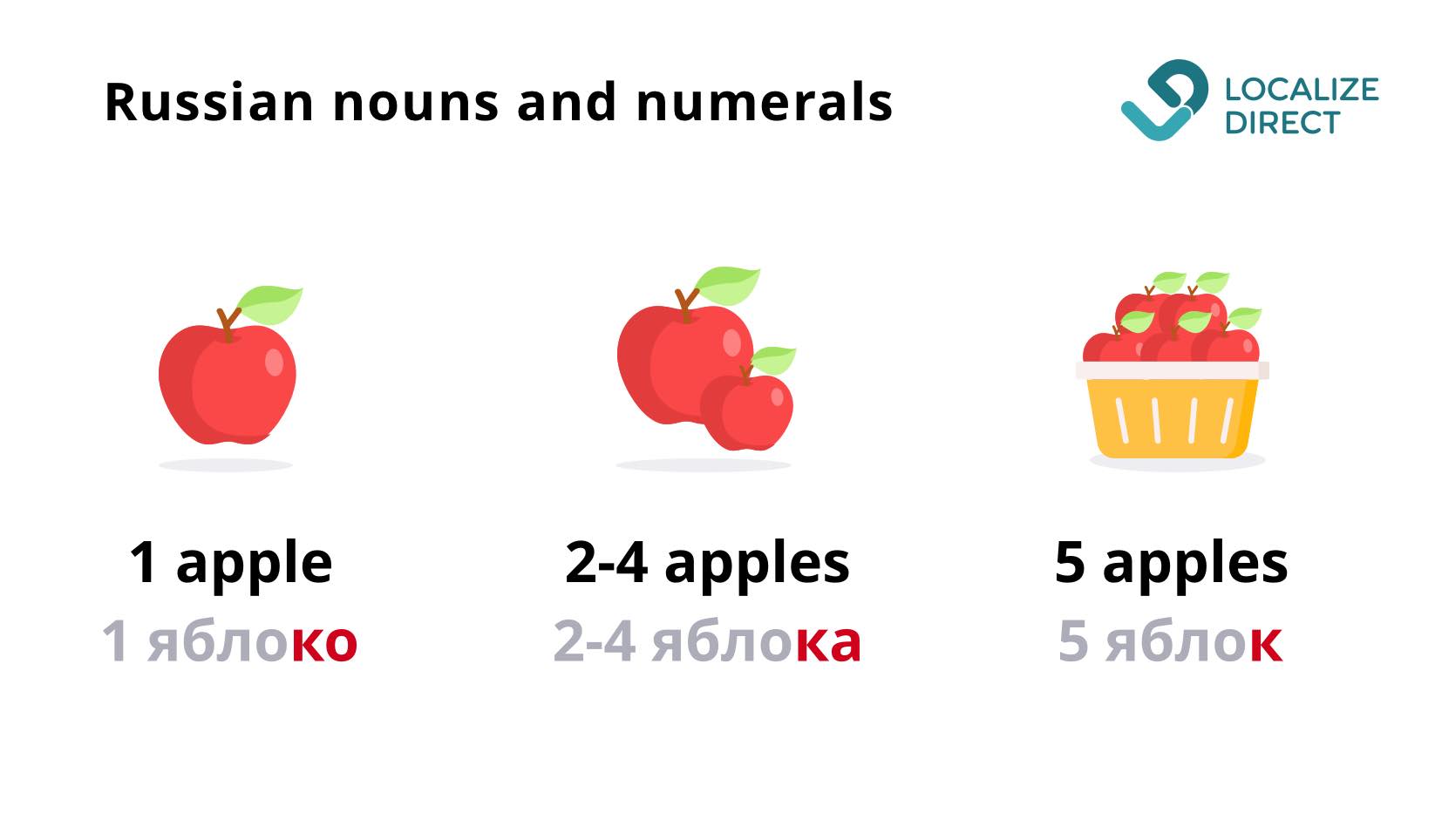 Now you understand why machine translation is a big no-no for professional translation companies specializing on Russia, right?

Same as Spanish, Russian has different forms for “you” in the dialogues: “ты” vs “Вы”. Their usage depends on the age difference, whether the interlocutors have met before, place and situation.

Slava: “The game Manor Cafe (that I translated), is full of characters of all ages and walks of life, so I had to carefully treat the formal/informal forms of address. If you have 10 characters, that gives you 45 possible two-character dialogues, not to mention those when 3 or more characters are talking. And you must always remember who addresses whom with the formal “You” and who doesn’t.

Perhaps, not that great idea.

Dmitry: Everybody loves puns and they’re fun to translate, but sometimes the equivalents we use are completely different from the original, so it’s important to exclude any puns from text that are crucial for solving a puzzle.

Russians are used to the Western culture and lifestyle in general. Many have played Western games from early childhood. However, they aren’t that proficient in European languages.

Slava: My advice would be: localize the game into Russian, but don’t put too much time and effort into culturalization/localization of in-game design elements.

Although Russian gamers are pretty tolerant towards ambiguous topics and appreciate irony and jokes, the Russian authorities don’t.

Dmitry: Generally speaking, I would avoid mockery of religion and the Russian church. We have a law that allows people of faith to file a complaint and sue you if they find something that is offensive to their faith. The Russian government is also very proud of past achievements, hence any mockery of the Russian role in World War II and any criticism of our past and current politics won’t be well received.

An example: LGBT characters in games can be seen as “the propaganda of homosexuality” which is illegal according to Russian law. Stardew Valley and Miitopia were rated 18+ compared to other markets for the same-sex relationships reflected in the game.

Work with VO experts who can adapt the translated text accordingly to make sure it flows naturally.

Since Russian is rich in synonyms, be consistent with your translations and keep the same style, avoid mistranslations, and speed up turnaround times. Otherwise, you’ll risk making a big hole in your loc budget.

Slava: I had to do a complete overhaul of all in-game text for quite a popular mobile strategy game (millions of downloads), because the translations had been made by different providers, and some of them were just subpar.

A tip: Allocate 2-3 hours for the game play for the post-implementation check (bug fixing) to minimize the risk of loc bugs. For Russian, LQA rates start at €28/hour.

Many Russians, who play games, have online discussions where they point out games they wish to be translated. But they won’t forgive you, game developers, for poor video game translation. They’ll pick the title to pieces and complain about loc errors on the forums, Youtube and among gaming communities. As one said, complaining is Russia’s national sport.

But is it worth the effort? Yes.

In summary, there are a few factors that highlight the potential for high ROI for your translated game. An upcoming country, a large game market, a preference to play in their native language and moderate English proficiency. Give it a try. Start by just translating the app store description (if we are talking about mobile game localization). When downloads increase - translate the in-game.