You’re developing a game, hooray! It’s a dream come true! However it’s not as easy as many on the outside will think it is. You’re not just working on the game itself, you may also need to be the marketing manager, sales director, localization manager and more. You need a budget for your marketing plan, you need a social media plan, and you need some awesome game reviews.

If time and cash flow are major factors for you, we suggest something with an undeniable impact on marketing, social media, reviews and downloads.

Localizing your game will increase your downloads and generate positive reviews from around the world; triggers that rank your game higher when potential players are searching for an awesome game to download. When they find your game, they are more likely to download it if they can understand the content.

**Now, the next step: where to start? Which languages to choose? Here are a few tips.**👇

How to localize your game on a budget?

First, test your game for the global market and receive instant feedback. Start with localizing your game description, metadata and keywords.

Then, when the positive effect is demonstrated, you translate the entire game text.

If your budget is a tight one - which languages should you translate into? Well, it depends.

Let’s find out which markets have the highest potential for mobile and PC games.

For console/PC, we looked at the most popular non-English languages that the Steam gamers play in.

For the mobile market, we studied App Annie’s report State of Mobile and identified the top countries by app store downloads and consumer spending. Since games made 72% of the app spend, we can assume that the same country ranking will be relevant for the gaming apps too**.** 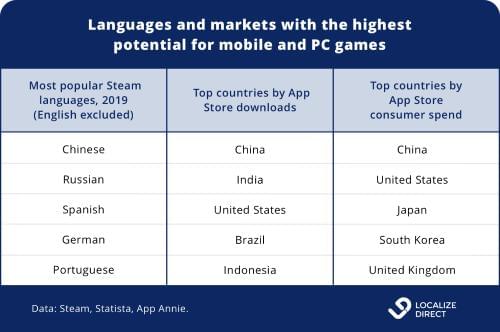 Note: We won’t analyze the US and the UK markets here as English is a standard in the video game industry. Translating a game into English is implied as essential.

Your hard work has finally paid off. You have slaving away day and night (most probably). You’ve been saving money where possible, you may have only been eating ramen noodles for months (ouch). Now, the alluring Steam green light is inviting you to come aboard and be a part of the Steam community.

In addition to English, there are five top languages you should translate your Steam game into. Translate today and have a 6-language game on Steam within a few days. 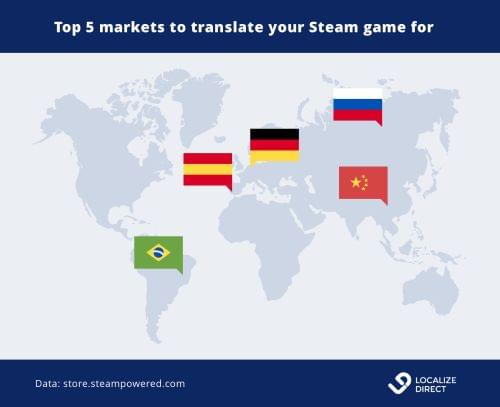 Almost ⅕ of the Steam audience set Chinese as their primary language, with the vast majority preferring the Simplified version which is spoken in PRC. Hong Kong and Taiwan use their own dialects of Traditional Chinese.

To make it in the Asian market, translation is key. Potential customers hesitate to download when the game isn’t translated. The market is huge, the potential massive, and to access properly, localization is the first step.

The Chinese PC games market is the largest in the world by a wide margin. More than 300 million Chinese people play PC games.

Read more about the Chinese market.

Russian is the third largest language on Steam (after Chinese and English). Over 13% of Steam customers speak Russian, and thus they prefer game downloads in Russian. PC games are more popular than console games: the Russian games market has been historically dominated by F2P PC games, although mobile games aren’t that far behind.

Steam (Valve) is one of the top gaming companies in Russia by turnover, number of transactions, and number of customers. A Russian translation, and a pricing model adjusted to the Russian market, is a rather safe investment.

The Spanish games market was in the top 10, globally generating over US$2 billion in game revenue. Out of the total Spanish Internet population, about half of the males and ⅓ of the females play PC and online games in Spain.

The Spanish language is spread throughout the globe, and a game translation into Spanish (a Latin American version) might even have an influence on the US market.

If you want to truly maximize on the Spanish speaking market, a localization into Spanish should include at least two versions:European Spanish and Mexican (LatAm) Spanish.

After English, Chinese, Russian and European Spanish, German is the 5th largest language on Steam. Germany has the highest game revenue in Europe.

Is the word “simulator” included in the title? Then Germany is your target market.

There is slow adoption of tablet gaming in Germany. Computer screens are more popular among Germans - 45% of men and 33% of women play on one although, no surprise, smartphones remain Germany’s most popular gaming platform.

More than 80% of PC games sold in Germany were purchased as downloads via the main portals like Steam, Origin, and Uplay.

Read more about localization specifications into German and other FIGS markets.

Portuguese is native to about 4.4% of Steam gamers, with the vast majority coming from Brazil.

And yes, Brazilian Portuguese is different from Portuguese.

About ⅓ of Brazilian gamers named PC as their favorite means of gaming. The country generated around a third of total Latin American game revenue in 2019. Brazil and Mexico together account for 67% of total revenue in Latin America.

You’ve probably heard about the launches in 2019 of mobile versions of Call of Duty and Mario Cart Tour. An effort by traditional console game devs to capture a slice of the expanding mobile market.

Why do they do it? Mobile is bigger. Mobile is the most popular form of gaming in the world. Simple. 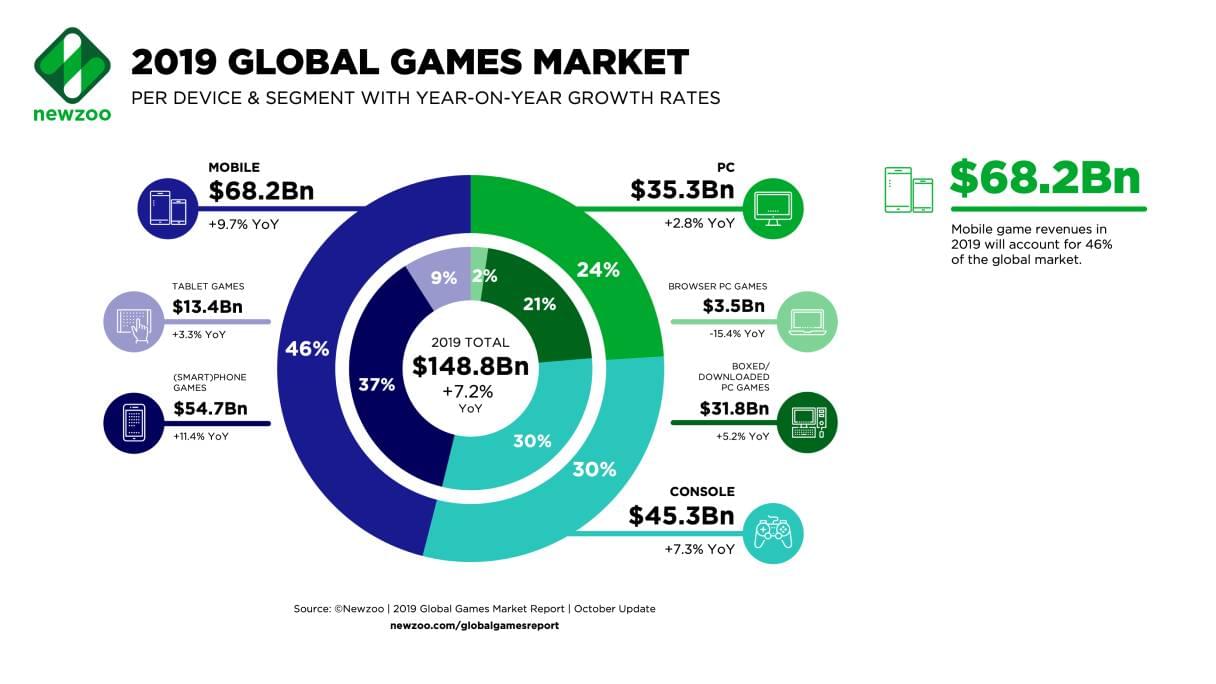 Globally, the mobile games market accounts for US$68.2B, almost 50% of the world’s market. Asia-Pacific, with more than 1.5B mobile gamers, makes up almost half of the global games market.

In 2019, gamers spent 25% more money on mobile games than on other gaming platforms (home and handheld consoles, PC/Mac gaming). There is a chance that in 2020, mobile gaming will surpass US$100B across all mobile stores.

When it comes to downloads, they’re fueled by emerging markets - for example; India, Brazil and Indonesia.

To get a piece of that market share, localization is key.

Top languages to translate your mobile game into to increase downloads

2014 was the first time that iPhones sold in the Chinese market exceeded the American market. Now, China is ranked #1 in the iOS App Store listings in terms of downloads, ahead of the US.

In general, Google Play has historically had more downloads than iOS; but iOS on the other hand, has a higher revenue. The growth of iOS in China has had a large impact on the iOS app market overall.

Google Play is banned in PRC. As a result, many local Android app stores have emerged. Tencent’s MyApp, 360 Mobile Assistant, Oppo, and Huawei App Market hold about 50% of the Chinese Android market.

China’s population in total is 4x the US, and the population with internet access in China is three times the number of the US. The potential in China is huge.

Hindi is the largest language market in India. Other major languages in India are: Marathi, Tamil, Telugu, Malayalam, Bengali, Punjabi, Oriya, and Assamese.

India is one of the fastest-growing mobile markets in the world. There are 132 million mobile gamers and a strong mobile infrastructure. 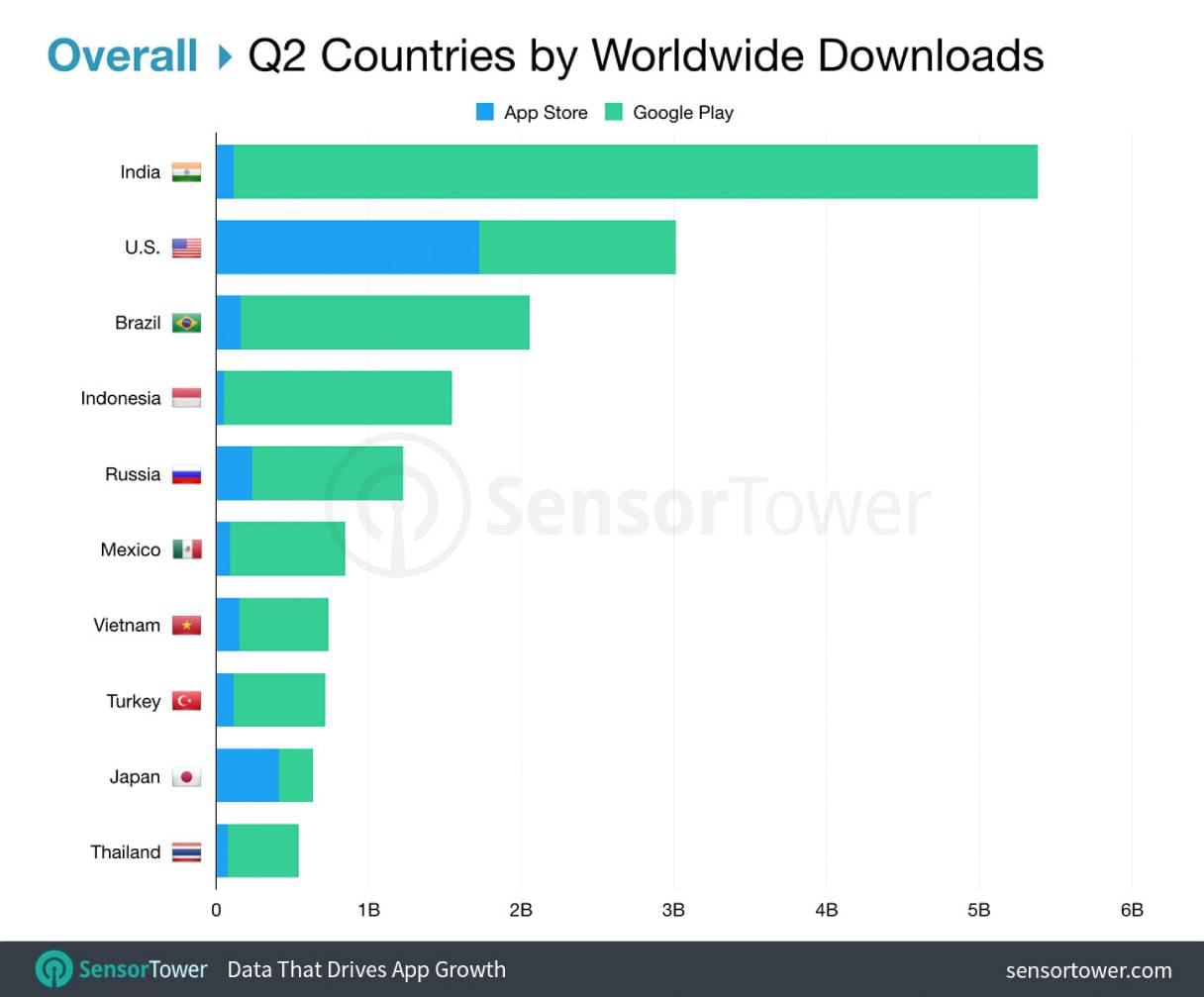 Growing income, improved broadband, a growing game population, and a larger variety of games to download, has resulted in a large growth in the Indian mobile game market.

Game revenue in India is estimated to triple in the following years, and may eventually hit 1.2 billion USD.

Brazil has the second highest ranking in terms of game revenue of the Latin American countries.

Brazil is, after India and the US, the 3rd largest country when it comes to mobile downloads.

With 267 million people, it’s the 4th most populous country in the world.

Indonesia generates over $1.1 billion in game revenue annually, which makes it one of the largest game markets of South-East Asia. Note that only ⅓ of Indonesians have access to the Internet.

Can you imagine how much money it will bring when everyone has access?

You can do the math.

More than 70% of the urban online population play mobile games with strategy as the favorite genre. 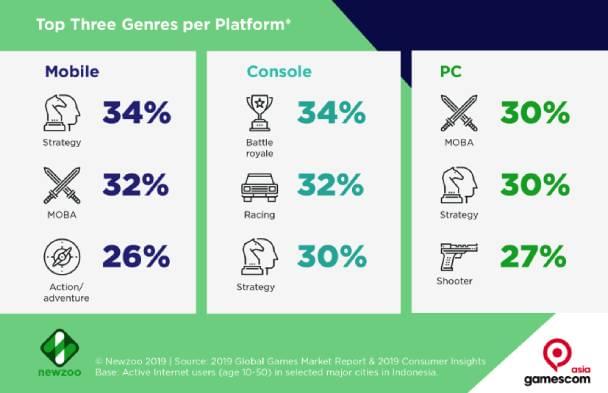 Top languages to translate your mobile game into to increase revenue

What a surprise, China is at the top of the list again. Even though the ARPU isn’t that high - $36 - the 1.4 billion population makes mobile game revenue skyrocket.

The Japanese games market is massive: the gamer population is 67.6 million, and revenue is $19.2B

Japan ranks highly in revenue in the app stores. Google Play has closed the gap with iOS in Japan.

South Korea is the home of both Samsung and LG. Naturally Android dominates.

Korean gamers are high spenders; especially on in app-purchases.

Geographically, South Korea is a small country, but revenues are impressive.

South Korea is ranked #4 in the world - higher than traditionally large game countries such as Germany, UK, and Australia.

As a rule of thumb, 10 of the most popular languages generate about 80% of potential game revenue. Want more details?

Try the interactive world map developed by LocalizeDirect, and see how many gamers your game could reach. Click the ORDER button in the top right corner, drop your file with strings, get the word count and feel free to play with the regions and languages. The tool is completely free. No worries about your data - we don’t store it until you decide to place an order.

Don’t use automatic machine translators or Google Translate. This will end up being:

It may even hurt loyal gamers’ feelings and certainly ame enjoyment. They will very likely share their disappointment online (see how many people are talking about this Italian game localization):

DID YOU F*CKING TRANSLATE "RESUME" INTO "CURRICULUM VITAE"???

They are still using Google translate for their Italian translation.
It may sound funny to you, but you have no idea how this hurts me on a persona level pic.twitter.com/y6ReEffsT4

We have received jobs from game developers that had previously been using machine translations. Read more about rather “interesting” translations.